Theater Review: Lend Me a Tenor 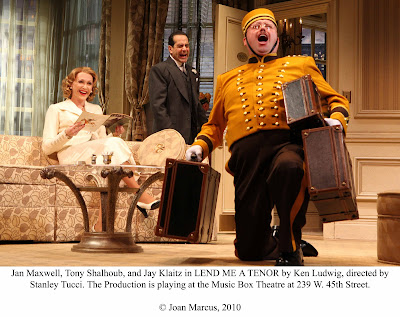 Stars Lend Themselves to Farcical Silliness
By Lauren Yarger
A star-studded cast directed by Stanley Tucci turns in a solid comedic performance to propel a fun Broadway revival of Ken Ludwig’s Lend Me a Tenor.

There’s just one problem. Saunders and Max think Merelli has died in his opulent Cleveland hotel room (designed by John Lee Beatty, complete with five doors lending themselves to the pop ins and outs and door slamming typical of this type of farce) and they quickly devise a scheme to go on with the concert and fool the waiting audience. Max, a budding opera singer himself, dresses as Othello and goes on as Merelli. 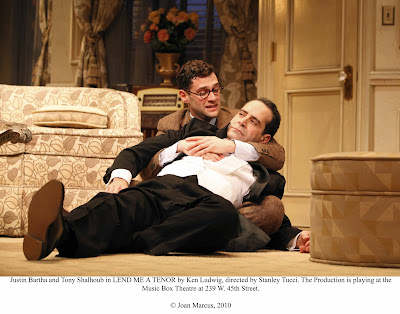 The two Othellos, elegantly costumed by Martin Pakledinaz (all of the 1930-era close are wonderful and there’s one blue evening gown to die for) and humorously made up (Paul Huntly, hair and wig design), confuse everyone. The evening includes rotting shrimp, evading the police, sexual double entendre and objects projected into the audience, among other things.

When Shaloub’s character finally figures out that Merelli isn’t dead, I so wanted him to frame the scenes with his hands à la Monk and say, “Here’s what happened.” My rewrite would have improved a somewhat weak script – it’s not the best farce ever written – but without my edit, the show still is a lot of fun. Watching these stars throw themselves into the physical humor and deliver their lines with impeccable timing is worth seeing.

Lend Me A Tenor also offers one of the most satisfying “into the curtain calls” around. Enjoy it at the Music Box Theatre, 239 West 45th St., NYC. Discounted tickets for friends of Masterwork Productions are available here.

Christians might also like to know:
• Language
• God’s name taken in vain
• Sex outside of marriage
Note: While there is a lot of sexual innuendo in the double entendre dialogue, it really is in the spirit of farce and is on the lower end of the scale for being offensive in my opinion.
Posted by LaurenYarger at 12:29 PM