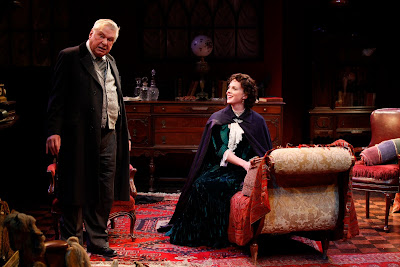 Photo of Brian Murray and Melissa Errico in Candida. Performances
through April 25 at Irish Repertory Theatre. (Photo by Carol Rosegg)
An Oft-Produced Play Where Not Much Happens
By Lauren Yarger
George Bernard Shaw’s oft-produced tale of a preacher’s wife asked to choose between the husband who takes her for granted and a younger man who woos her with poetry and passion gets its latest staging Off-Broadway in a production designed and directed by Tony Walton.

Candida, the 1894 work with its turn-of-the-century dialogue and politics doesn’t offer a whole lot of action in its two hours and 10 minutes, but at least the play by Irish-born Shaw is in a fitting home at Irish Repertory Theatre.

In it, Eugene Marchbanks (Sam Underwood) falls in love with the title character Candida (Melissa Errico), causing her husband, the Rev, James Morrell (Claran O’Reilly) to wonder whether his wife might prefer the shy, poetic youth to him. He contrives to leave Eugene and Candida alone at their London home while he goes off to one of his frequent speaking engagements where his social/religious views are much in demand. Attending the speech and filling out the rest of the cast are Morrell’s saucy typist, Prosperine Garnet (Xanthe Elbrick), who secretly loves her employer, Morrell’s father-in-law, Burgess (Brian Murray), who thinks everyone in the household is mad, and the Rev. Alexander Mill (Josh Grisetti), Morell’s creepy curate.

Will Eugene and Candida take advantage of being left alone to allow their feelings to blossom? Will Candida suprise them both when they force her to choose between them? Not likely. The plot is rather contrived, really. Eugene is supposed to be shy, for example, but apparently has no problem making inappropriate advances toward a married woman or about bragging about them to her husband. Why Candida appears to welcome Eugene’s advances, we’re not exactly sure, except that if she just rebuffed him at the start, there wouldn’t be a play. At the time it was written, perhaps the message that a woman might get to speak her own mind was novel. Today it feels dated.

While the characters are at a loss for what to do to solve their dilemmas, Walton correspondingly has them wander around stage without any purpose, and spend a lot of time primping pillows, straightening an afghan and stoking the fire on his set (Heather Wolensky is the associate designer) lighted by Richard Pilbrow. In fact, the afghan gets a final smoothing during the curtain call as well, just for good measure. Most of the period costumes work, except for an elegant green velvet gown Candida wears at her entrance. The dress seems of the wrong period as well as inappropriate for the travelling she just completed.

If you enjoy tales where not much happens, but all turns out well in the end and where there will be no content notes at the end of this review, then Candida is the play for you. It runs through Sunday at Irish Rep, 132 West 22nd St., NYC. For tickets call 212- 727-2737.