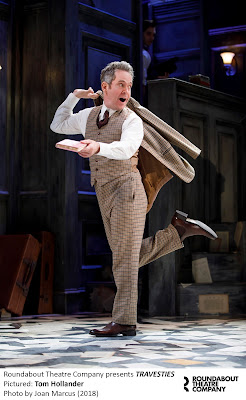 By Lauren Yarger
The first scene of Tom Stoppard's Travesties, getting a Broadway run by Roundabout Theatre Company, is all in German and the audience has really no idea who the characters are or what is going on. When the language switches to English, the situation doesn't improve much, unfortunately.

A hodgepodge of characters, among them Lenin (Dan Butler)and James Joyce (Peter McDonald) emerge in the memories of  Zurich during World War I as remembered by an old man, Henry Carr (Tom Hollander). Hollander and McDonald reprise their roles from the Menier Chocolate Factory production which sold out in London's West End, also under the direction of Patrick Marber.

Lenin and Joyce clash with Tristan Tzara (Seth Numbrich), founder of Dada, an avant-garde movement of the time that revolutionized the art world just as Lenin's socialism was transforming governments. They get romantically entwined with Cecily (Sara Topham) and Gwendolyn (Scarlett Strallen) in a case of mistaken identity a la The Importance of Being Ernest (Carr is obsessed with the other guy, Algernon...). Cecily is a librarian in the Zurich library (designed by Tim Hatley, who also designed a period costume for each character).

There is a bunch of philosophy about art, politics, thoughts on perception from an aging memory and even some song and dance thrown in to the mix (Original Music by Sound designer Adam Clark and Movement by Polly Bennett), but it never blends together to form a cohesive work. scenes are repeated (we get that Act-One opener later in English), but nothing seems to click and a play that seems to want to be funny at times, really isn't.

"What is the meaning of this?" Joyce asks about Dada.

"It has no meaning. It is without meaning as Nature is. It is
Dada," responds Tzara.

I guess I could just say this play is Dada. Or maybe I am just really tired of revivals with lots of male characters who don't seem very relevant.  I don't think I was alone. At intermission, in the women's rest room, there dead silence. Let's just say normally you hear chatter about the show as women wait in the very long lines for the the stalls. In the restroom at American Airlines Theatre, you could hear a pin drop. Finally a woman ventured, "You have to really focus. . ." There was no reply.

To be fair, there were some people in the audience who seemed to be enjoying themselves immensely and laughing at lines whose humor was lost on me. A song between Gwendolyn and Cecily had a few amusing twists but was interminable -- like this play which clocks in at two hours and 30 minutes, but feels like about four.

Opal Alladin as Nadya and Patrick Kerr as Bennett, round out the cast of this productions, which plays through June 17 at American Airlines Theatre,  227 west 42nd st., NYC. roundabouttheatre.org