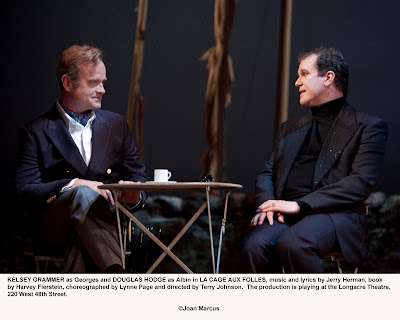 The Cagelles interact with audience members prior to and during the show and Shortall’s inclusion of cabaret tables for a row of audience in front of the stage completes the ambience.

Starring at the night club is ZaZa, a.k.a. Albin (Douglas Hodge), who is Georges’ long-time partner. Together they have raised Georges’ son, Jean-Michel (a rather stiff A.J. Shively), the product of a one-night stand. When Jean-Michel wants to marry Anne (Elena Shaddow), there’s a slight problem (besides Albin’s initial shock that he would want to marry a woman). It seems Anne’s father, Monsieur Dindon (Fred Applegate) just happens to be leader of the Tradition, Family and Morality Party and has pledged to shut down all of the immoral clubs on the Riviera featuring transvestites (and yes, we’re smart enough to know that dindon means “turkey” in French.)

Jean-Michel begs his father to rid his home of all the trappings of his lifestyle, including Albin, when the wealthy and righteous Dindon and his wife (Veanne Cox) come to inspect their daughter’s prospective in-laws. Helping with the ruse (the book is by Harvey Fierstein) is Georges and Albin’s maid/butler, Jacob (Robin DeJesus) who wants a chance to perform in drag at the club too, and restaurant owner, Jacqueline (Christine Andreas who provides the best singing voice in the cast).

There are awkward moments, dancing (Lynne Page choreographs), tunes (Jerry Herman wrote the music and lyrics) and finally, there is an unmasking of the elaborate charade where everyone decides “I Am Who I Am” and that “The Best of Times” is now (these are two of the show’s signature songs).

None of the performances really stands out. Grammer brings a sweet charm to the man torn between love for his son and love for the love of his life and there are only a few moment when you think Frasier is on stage. (Rumor has it that Grammer may switch and play Albin once Hodge, performing the role that won him an Olivier Award for the production in London before the show transferred here, leaves. Albin’s songs may prove an even greater challenge for Grammer, however.)

Christians might also like to know:
• Cross dressing
• Language
• Scantily clad actors
• Sado masochism
• Sexual dialogue
• The two men kiss at the end of the show
Posted by LaurenYarger at 9:50 PM

I find your blog to be very infomative. I am trying to decide what show I want to see when I go to the city in August and La Cage is currently on my list. This review was very helpful in helping making my choice a bit easier. It sounds like something I want to see. :)