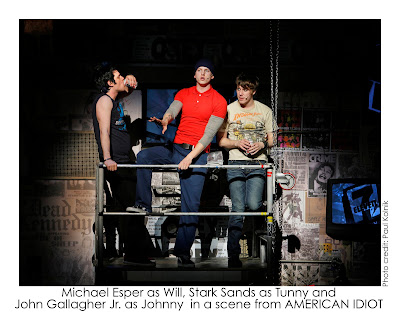 A Rocking Voyage with a Redeeming Message
By Lauren Yarger
Partly hit rock album and partly this generation’s answer to Hair, American Idiot bursts onto Broadway with a new musical featuring the music of the band Green Day (with lyrics by lead singer Billie Joe Armstrong) and the story of the search for meaning and purpose as told on their 2004 multi-platinum album by the same name.

Directed by Michael Mayer (also the director of Spring Awakening, another break-through type of rock musical) and starring John Gallagher, Jr., the show offers 90-minutes of loud rock and a surprisingly redeeming message.

Mayer and Armstrong co-wrote the book. Gallagher is Johnny, a.k.a. Jesus of Suburbia.
"I'm the son of rage and love. The Jesus of Suburbia, from the bible of none of the above, on a steady diet of soda pop and Ritalin..." he sings.

He is a disillusioned youth opposed to the war in Iraq with an unhappy home life where his stepfather tells him he’ll never amount to anything. Johnny doesn’t want to be just another “American Idiot” who is powerless to do anything but accept the status quo, so he and friend Tunny (the delightful Stark Sands) go to the city to find something more while their other friend, Will (Michael Esper) stays home when his girlfriend, Heather (Mary Faber) discovers she is pregnant.

Tunny joins the military while Johnny finds sex and love with Whatsername (an engaging Rebecca Naomi Jones) and drugs with St, Jimmy (a vocally sharp Tony Vincent), who is a sort of anti-Christ to Johnny’s Jesus. Meanwhile, Will turns to drugs and alcohol too.

While an injured Tunny recovers in a hospital, he fantasizes about The Extraordinary Girl (Christina Sajous) who hovers above him in a burka. She discards the garment to reveal an I-Dream-of-Jeannie-like harem outfit and the two fly off (in some neat aerial theatrics). Meanwhile, Johnny hits bottom, loses Whatsername and believes St. Jimmy’s lies that everyone hates him and will leave him.

“I amounted to nothing,” he says, realizing he has fulfilled his stepfather’s prediction. Turns out life in the city isn’t much more than a "Boulevard of Broken Dreams,” one of Green Day’s most popular songs and one of a few ballads that break up and balance the harder rock sound of the show.

All of the actors give strong performances and the music, though considered in the Punk genre, actually is quite good and memorable (orchestrations and arrangements are by Tom Kitt). Despite the rather heavy and mature nature of the experience, the message that sex and drugs aren’t the answer is redeeming -- and that comes through loud and clear too.

The choreography by Steven Hoggett is crisp, pertinent, exciting and perfectly executed by the large cast.

Christians might also like to know:
• Language throughout
• Drug use depicted throughout
• US flag displayed upside down
• Sexually suggestive move
• Sexual activity
• Scantily clad actors
Posted by LaurenYarger at 6:56 AM