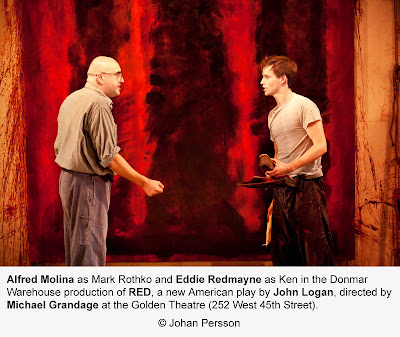 Play about Abstract Artist Leaves an Impression
By Lauren Yarger
If you’ve ever gazed at an abstract painting and thought “there must be more to this,” you’re right and in the case of a series of murals commissioned by the Four Seasons Restaurant in the Seagram Building on New York's Park Avenue from master abstract impressionist Mark Rothko, there’s a whole play more to them.

It’s playwright John Logan’s Red, which stars Alfred Molina as the self-absorbed painter and Eddie Redmayne as his assistant, Ken.

Set in 1958, Rothko receives what was then the world’s largest commission to paint the murals, in part recreated here in a studio set designed by Christopher Oram, terrifically brought to life by Neil Austin’s lighting.

Molina and Redmayne, who created the roles for the show produced by the Donmar Warehouse in London, are directed by Michael Grandage and give solid performances. Rothko is brooding, pondering everything from Nietzsche and classical music to divine guidance as he creates his paintings. In fact, he sits on stage for 20 minutes prior to the curtain just studying one of his creations.

Ken, an aspiring painter himself, at first is thrilled to be working with someone of Rothko’s reputation and is happy mixing paints, stretching canvas and sometimes being given the privilege of helping to apply the undercoat for a painting. Rothko continually challenges him to see more than just red or any other shade on the canvas as just a color. The master is more interested that he "feel" the colors.

One of the most memorable scenes is of the two men applying red primer to a canvas, wielding their brushes and moving alongside, around and over each other almost in a creative ballet while music plays on the phonograph (Adam Cork, composer and sound designer).

The hero worship wears off, however, and after two years, Ken finally sees red, if you will, and unleashes his frustrations on the uncaring mentor, who barely has taken the time to show and interest in anything the assistant does outside of the studio. Is he married? How are his paintings coming along? How has he coped with having witnessed the murder of his parents as a young boy?

These aren’t questions Rothko has asked because he increasingly withdraws into the dark shadows of his studio, away from people, away from the commercialism of the art business and its new and upcoming competitors and away from natural light which he finds so offensive. He doesn’t want to be a mentor or father figure for the young artist. And, he finally realizes, he doesn’t even want his beloved paintings hanging in the posh restaurant where New York’s wealthy wheel and deal.

There’s a lot of interesting history here about Rothko and those paintings (which never do make their way to the Four Seasons) and some fine acting in the interactions between the two characters. Logan’s Red is a lot like an abstract piece of art that you look at for a while only to find its image keeps reappearing in your memory and has made a lasting impression long after you've left.

Christians might also like to know:
• Language
• Lord’s name taken in vain
Posted by LaurenYarger at 1:31 PM