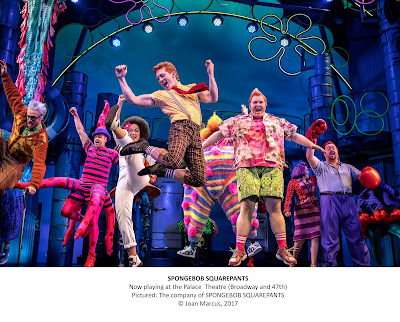 By Lauren Yarger
He's a sponge who lives in a pineapple under the ocean. If you're laughing already and saying, "I can't wait to see that," then Broadway's SongeBob SquarePants, will be just the musical for you. If that doesn't make sense, you're probably of a certain age (like me) and you'll be scratching your head at the attraction of this show, conceived and Directed by Tina Landau and based on the popular Nickelodeon TV cartoon series.

Confusion doesn't mean the tale isn't entertaining, however. In fact, a woman seated near me was beside herself with laughter throughout. She reminded me of myself when I laugh hysterically at old "Get Smart" episodes. It's silly and predictable, but I roll on the floor no matter how many times I hear Maxwell Smart say, "Would you believe. . . " The laughing audience member actually was more entertaining to me than the plot of this musical, but the loud, colorful set and costume design (by Davd Zinn) with high-energy choreography by Christopher Gatelli didn't allow boredom to set in.

Ethan Slater makes his Broadway debut as the sea sponge (who in cartoon land looks more like the variety you have on your kitchen sink an who on stage wears a yellow shirt and yellow plaid pants) who has a variety of underwater sea friends who live with him in Bikini Bottom (if you are laughing at that name for a community, you would have been good company with the hysterical woman near me). They are:


But whereas I scratch my head and ask questions, others are laughing, so I won't go into details of the the plot, with a book by Kyle Jarrow that has SpongeBob and his friends protecting Bikini Bottom from annihilation. You'll either think it's wonderful or ask too many questions. . . Let's just say there were a LOT of children in the audience who were enjoying themselves and that is a good thing for Broadway.

Music supervision, orchestrations and arrangements are by the fabulous Tom Kitt (Next to Normal) who provides some additional music alongside original songs by Yolanda Adams, Steven Tyler and Joe Perry of Aerosmith, Sara Bareilles, Jonathan Coulton, Alexander Ebert of Edward Sharpe and The Magnetic Zeros, The Flaming Lips, Lady Antebellum, Cyndi Lauper, John Legend, Panic! At the Disco, Plain White T’s, They Might Be Giants and T.I., and a song by David Bowie and by Tom Kenny and Andy Paley. Additional lyrics are supplied by Jonathan Coulton.

SpongeBob squares off at the Palace Theatre, 1564 Broadway, NYC. Tickets are $49-$145: spongebobbroadway.com

FAMILY-FRIENDLY FACTORS:
No content notes
Posted by LaurenYarger at 7:50 AM