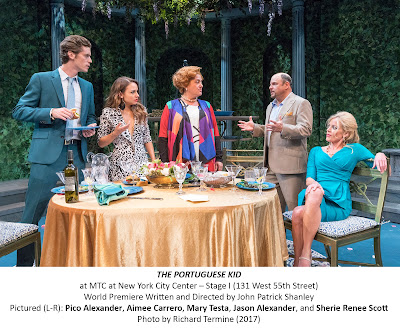 Can you say Doubt?

If that all sounds very impressive, the feeling wears off shortly into the first act and we start to doubt that this play is going to have any of the sparkle of Shanley's other excellent work like Doubt, Outside Mullinger, the really excellent Prodigal Son, or even his Academy -Award winning film "Moonstruck." It doesn't. The plot isn't very interesting and the star-studded cast isn't able to do much to develop the characters. Using the playwright as director probably isn't the best idea in such a situation, even if this is the 12th collaboration between Manhattan Theatre Club and Shanley.

Widow Atalanta  Lagana (Scott) visits her long-time friend and lawyer, Barry Dragonetti (Alexander) seeking help selling her Rhode Island estate. The two go way back, to the time when Atalanta saved Barry from a Portuguese mugger who still haunts him for no reason that makes sense. The two never got together -- we're not sure why, but a good reason not to would be Barry's mother (a funny Testa) who doesn't  like Atalanta much and makes Medea look like a walk in the park. Meanwhile, Atalanta, it seems, calls out Barry's name while having sex with others, so maybe they will figure out how to make things work now?

Add to this lots of sexual dialogue, some anti-Trump jokes, Atalanta's current eye-candy boyfriend, Freddie Imbrossi (Pico Alexander), and Barry's wife, Patty (Aimee Carrero), and . . . well, things still don't get interesting in the one-hour, 40-minute play without an intermission (which somehow is a recipient of an Edgerton Foundation New Play Award.)

Getting most of the attention here would be John Lee Beatty's set, which pleasingly revolves and changes to take us from Barry's office to Atalanta's bedroom, to Barry's home and then to Atlanta's patio, and William Ivey Long's costumes.