Review: When the Rain Stops Falling 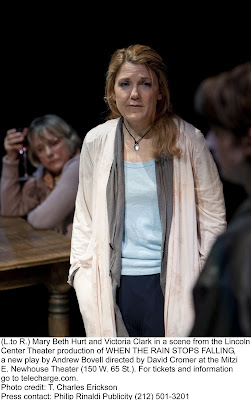 The Rain and the Confusion Never Cease
By Lauren Yarger
When viewing Andrew Bovell’s When the Rain Stop Falling Off-Broadway at Lincoln Center, be sure to open the Playbill to the cast and family-tree pages, study them and keep them open for the duration. You’re going to need them if you want to understand what’s happening on stage.

I did not have the benefit of that friendly advice when I saw the show and as a result spent the entire 90 minutes trying to figure out who was who and mistakenly thinking people were who they were not, only to realize through some dialogue that they couldn’t be who I thought they were. And since there is no intermission, there wasn’t the option of trying to make a quick study before the second act.

In fact, my companion and I discussed who was who at length following the show, and we weren’t alone, as other theater goers lunching at our restaurant also were trying to make some sense out of the all the characters. Even after we thought we had it figured out, I realized when I sat down to write this review that we still hadn’t gotten it right.

So dear readers, I will not attempt to tell you who was who and who did what since I’m not exactly sure. I can tell you that a number of characters (nine, I think) many of whom are named Gabriel or Gabrielle, played by various actors at different ages, are portrayed at various times from 1959 to 2039 and that the play is set in London and in Adelaide, Alice Springs, Ayres Rock and the Coorong, Australia (and most of that I got from the program, not from Bovell’s script).

At one point a fish drops out of the sky and indeed, fish figure prominently in the various vignettes we share with the characters. The folks repeat a lot of the same conversations and are particularly interested in discussing how the incessant rain isn’t so bad when you consider how much it rains in Bangladesh.

What it all means, I honestly am not sure, but there are some highlights (and my companion absolutely loved the play, though I’m not sure he could tell you for sure why). There are some really nifty rain and lighting effects (David Korns, Tyler Micoleau, design). The always excellent Victoria Clark who plays Gabrielle York, older and Mary Beth Hurt (Elizabeth Law, older) are ably directed by David Cromer of Our Town fame and give moving performances as women trapped in lives they didn’t expect trying to do what they think is best.

Cromer’s outstanding moment comes right at the beginning of the play when all of the various characters walk past each other in the rain on a revolving stage that symbolizes the vicious cycle of these people’s lives. It’s terrific theater. Then I got lost in the deluge of characters and time tripping and never got my head above water again.

After the characters share their moments, there is reconciliation between a father and son and the rain finally stops. I’m just not sure which father and son, because even now when I look at the family tree and remember the play, I think it’s one particular father reuniting with his son. The show’s publicity information, however, tells me it’s actually two different characters.

Christians might also like to know:
• Language
• Lord’s name taken in vain
Posted by LaurenYarger at 2:48 PM