Broadway Theater Review: How I Learned to Drive with Mary-Louise Parker and David Morse 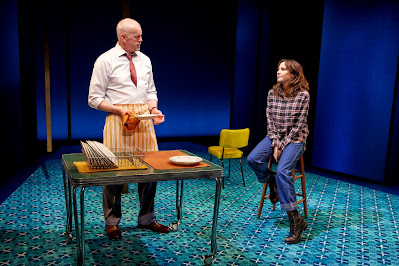 How I Learned to Drive
By Paula Vogel
Directed by Mike Brokaw
Samuel J. Friedman Theatre
Through May 29

25 years ago Mary-Louise Parker and David Morse created characters of a young woman coping with sexual abuse and the uncle who abuses her in Paula Vogels Pulitzer-Prize winning play, How I Learned to Drive. They reprise their roles in Manhattan Theatre Club’s Broadway presentation which yields several truths:

The play focuses on Li’l Bit (Parker) who is groomed over many years sexual abuse by her uncle Peck (Morse) to participate in the abuse and to wonder whether she has imagined most of it, or whether anything really was wrong with whatever really happened. Vogel Greek Choruses, Female (Johanna Day, who also was in the original cast a quarter of a century ago) Teenage (Alyssa May Gold) and Male (Chris Myers) with these actors playing multiple characters like young Li’l Bit, her mother, another abused child, etc. to tell the story through non-linear memories and present occurrences.

The audience, hopefully more savvy nowadays about abuse and grooming (a term not even used when the play premiered at the Vineyard Off Broadway), doesn’t have much doubt that Li’l Bit indeed has been abused. The question to be answered is for how long.

Family nicknames have been assigned in reference to body parts and gatherings around the kitchen table  -- titled “On Men, Sex, and Women”-- are peppered with sexually charged innuendos. Li’l Bit’s mother refuses to hear her little girl’s fears about being sent on a road trip alone with Uncle Peck. The family laughs off his disdain for his wife. His wife shrugs off her growing concerns that something is going on between her husband and his niece downstairs in his dark room. Her solution is to wait for Li’l Bit to go off to school so she can have her husband back.

Many of Li’l Bit’s memories are of the driving lessons her uncle gave her. He’s always clear that when the lessons start shifting from cars to sexual activity he won’t do anything he doesn’t want her to do. He’ll stop drinking if she just spends time with him, too. Each promise puts the responsibility on his under-age niece, who begins to question if what they are doing is right.

“Have I forced you to do anything?” Peck asks?

Peck, operating in his own reality, convinces himself that he has a future with his niece once she turns 18. Li’l turns to alcohol and flunks out of school, but starts to recognize her uncle’s obsession with her as unhealthy.

Original Director Sam Gold ably directs the performances and transitions in time, crucial to the storytelling. Vogel’s genius decision to tell the story in fractured memories keeps an element of doubt creeping throughout the story – much like Li’l Bit has herself. The story plays out on Rachel Hauk’s wisely sparce set (chairs double as the car seats) with other design elements contributing to the mood Mark McCullough (lighting design), David Van Tieghem (original music and sound design).

The fact that this play is as fresh and topical today as it was 25 years ago is upsetting. The “boys will be boys” and “women really want it” mentality is a close as your morning newspaper. And why did Broadway wait 25 years to produce the work of a Pulitzer-Prize winning author? That answer is easy. Because she is a woman and women, especially those over 40, are pretty much ignored. Just call us Li’l Bit.

Proof of vaccination and a valid ID will be required to enter the theatre. Masks must be worn at all times. For more specific information go to: manhattantheatreclub.com/protocols

Posted by LaurenYarger at 12:03 PM