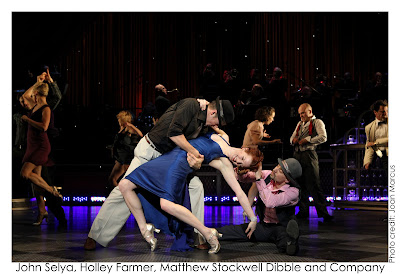 Big Band, Big Production, Big Entertainment
By Lauren Yarger
A big band, vibrant dancing to the choreography of Twila Tharp, spectacular lighting by Donald Holder and the singing voice of Old Blue Eyes himself combine to make Broadway’s Come Fly Away an enjoyable evening of entertainment.

Tharp, who brought Billy Joel’s music to life on the Great White Way in Movin’ Out, repeats the formula for Come Fly Away: no spoken dialogue, no real story, but lots of dance with the choreography telling the story for each vignette. Humor abounds in the "stories" involving the romance of two young bumbling sweethearts.

All of the action has four couples falling in and out of love linked by a night club theme on a deco-ish set (James Youmans, design) which houses a 19-member big band orchestra conducted by Russ Kassoff on piano. Holder’s lighting creates spectacular effects, illuminates the large stain-glass-type tray ceiling which unfortunately moves and floats ominously above the action, and creates a larger-than-life portrait of Frank Sinatra, whose own vocals are nicely synced with the instruments and live singing by Hilary Gardner and Rosena M. Hill.

A few segments I found rather degrading to women (the dancer is passed from man to man, crawls across the stage like an animal with a piece of costume in her mouth to mention a couple). Unfortunately each segment I found objectionable also was performed by the African American woman dancer.

Otherwise, the show is visually pleasing. Costume Designer Katharine Roth creates shiny, swirly dresses for the women and elegantly slick suits for the men. It’s an enjoyable show, especially if you like the old classics like “I’ve Got You Under My Skin,” “You Make Me Feel So Young,” “Witchcraft,” “Pick Yourself Up,” Makin’ Whoopee,” “My Way, “ and tons more.

Come Fly Away plays at the Marquis Theatre, 1535 Broadway. NYC. Discounted tickets for friends of Masterwork productions can be purchased here.

Christians might also like to know:
• A few sexually suggestive dance moves
Posted by LaurenYarger at 3:31 PM