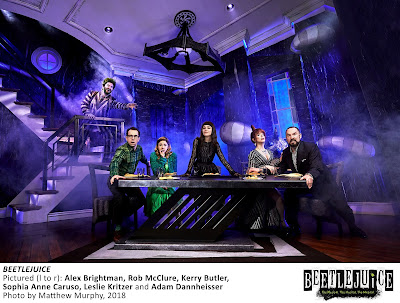 It’s showtime, folks! The ghost-with-the-most comes to the stage in this edgy and irreverent musical comedy based on Tim Burton’s dearly beloved film.BEETLEJUICE tells the story of Lydia Deetz, a strange and unusual teenager obsessed with the whole “being dead thing.” Lucky for Lydia, her new house is haunted by a recently deceased couple and Beetlejuice, a delightful demon with a real zest for life. When Lydia calls on Beetlejuice to scare away anyone with a pulse, this double-crossing specter shows his true stripes, unleashing a (Nether)world of pandemonium, and the biggest sandworm Broadway has ever seen.

Posted by LaurenYarger at 9:11 AM