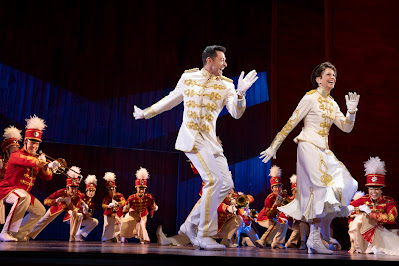 Hugh Jackman, Sutton Foster and the cast of The Music Man. Photo by Julieta Cervantes.

By Lauren Yarger
Broadway's revival of The Music Man starring Hugh Jackman and Sutton Foster is great fun with a capital "G"  and that rhymes with T and that stands for Theater! Live theater, that is, on stage greeted by a packed, enthusiastic audience who roars at the star's entrances and generally delights in this fun revival.

After several postponed openings and a number of closings due to Covid, Meredith Willson's  classic finally is playing to its sold-out audiences willing to pay out a lot of money to see what is one of the few highly anticipated shows of the season (tickets range from $99 to $550 and are hard to come by). They won't be disappointed.

Winner of the 1957 Tony Award for Best  Musical, the show about old-fashioned, small-town American values is a staple of high school and community theater groups. It wouldn't be my choice for a Broadway revival. But when you can pair the ever-popular Hugh Jackman and super talented Sutton Foster in the lead roles, that's money in the bank. Director Jerry Zaks has re-assembled his creative team from the very successful revival of Hello Dolly! starring Bette Midler and has drafted an impressive list of big stars playing minor roles to create an entertaining production giving some 21 other cast members their Broadway debuts with a vibrant, full orchestra directed by Patrick Vaccariello.

Jackman stars as "Professor" Harold Hill, a hustling, traveling salesman who bilks innocent townspeople out of money they have invested in their kids' music lessons and uniforms to form a never-to-materialize marching band. Hill doesn't read music, so he encourages his students to "think" the music, resulting in, well, nothing. Before the townspeople catch wise, he has bolted and left a long line of jilted piano instructors in his wake. Until, that is, he arrives in River City. IA (depicted in almost cartoon-quality by Set Designer Santo Loquasto, who also designs the rather bland early 20th century costumes).

When Marian's mother (Marie Mullen) and her little brother, Winthrop (a winsome Benjamin Pajak), show her a good side to Hill, the librarian eventually falls for the con man's charms as well.

There are some subplots, but they don't draw away from the show's main goal of presenting a feel-good, big scale, old-time feeling musical. Escaping into a land of "feel good" is like a jab of a life-giving booster shot, preferable to the one required for entrance to the theater. The arrival of "The Wells Fargo Wagon" at the close of act one is the stuff musicals are made of and brings a burst of joy from the audience.

This revival is not an exact replica of the original production, but it doesn't stray far. Some songs have been moved around, or expanded for additional dance, for example. In addition, some lyrics that suggested unwanted advances toward women are acceptable -- like in "Shipoopi," led by the entertaining Shuler Hensley as Marcellus Washburn -- have been rewritten by Marc Shaiman and Scott Wittman (Hairspray) to make them less offensive in the current culture.

Foster is the show's high note. What a pleasure to see her on stage again. She gives an unusual depth to Marian and sings and dances with joy. I would have suggested a rewrite that would have made Winthrop her son. It would have cut the vast number of years between the siblings and given Marian even more motivation to distrust men if the boy's father had left.... "Till There Was You" was lovely (except for the rude audience member who sang along making it a duet....)

I have a few nitpicks. Jackman is rather removed from the experience. I expected a more layered, character with hints of his deceitful nature. Instead, he kind of walks through the role smiling most pleasantly. There is little chemistry between him and Foster and not a clear reveal for why their feelings toward each other change. But Jackman can do no wrong and the audience is delighted, so what do I know? I do know that the mayor and his wife (played by a delightful Jayne Houdyshell -- we wish there were more for her to say/do here with her extraordinary comedic talent) probably would not have produced a child of color, especially not in 1912 Iowa. Color-blind casting, while well intentioned, does not always work in every story.

Because we've got Covid trouble here in the city and can't smell the greasepaint through the wretched face-covering required at all NY theaters (and Music Man's 2:40 runtime with intermission is a long time to have to remain masked), at least with this fun revival, we can hear the roar of the crowd. And they do roar with delight here.  musicmanonbroadway.com.

MASKS REQUIRED: All guests must wear a properly fitting mask over the nose and mouth in the theatre except when eating or drinking in designated areas.

•  VACCINATIONS REQUIRED FOR AGES 5+: Everyone ages 5 and older must be fully vaccinated with an FDA or WHO authorized vaccine. If it is less than 14 days after the last vaccine dose (excluding boosters), proof of a negative test is also required.•  IF YOU CANNOT BE VACCINATED: Children under 5 and people with a medical condition or closely held religious belief that prevents vaccination may show proof of a negative test. Testing results must be provided by a qualified lab, administered by a heath care professional.•  PHOTO ID REQUIRED: Guests ages 18 and older must present a valid government-issued photo ID. Guests under 18 may also show a non-photo government-issued or school ID. Children under 12 must be accompanied by an adult who meets the above requirements.•  Guests who do not comply with these policies will be denied entry or asked to leave the theatre.

Posted by LaurenYarger at 6:32 PM