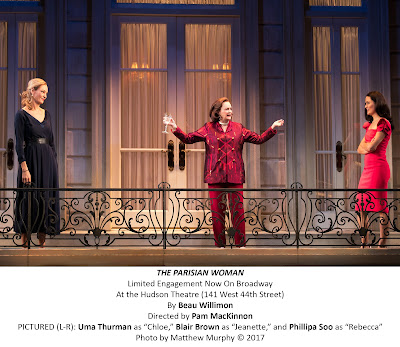 By Lauren Yarger
Blackmail, political ambition, sexual scandals and Trump jokes combine to make more than today's headlines. They are the crux of a new play, The Parisian Woman, from "House of Cards" creator Beau Willimon, based on a play focusing on those  topics -- well sans the Trump jokes -- that stirred up some controversy in late 19th-Century Paris long before being anti-Trump was in vogue.

It stars Uma Thurman ("Kill Bill, "Pulp Fiction," “Imposters” in her Broadway debut as Chloe, a Washington DC socialite playing politics to guarantee an appeals-court appointment for her  husband, Tom (Josh Lucas, also of film fame: "Sweet Home Alabama" and "American Psycho"), whose career as a tax attorney hasn't exactly qualified him for the position. We're not ever quite sure how these two ended up together. Was there ever any love between them, or was it all a partnership to get ahead politically. In the end, we don't care that these answers never seem forthcoming.

Chloe's romantic liaison with big-time Trump donor Peter (Martin Csokas) doesn't seem to work in the couple's favor, so she uses her skills on well-connected Jeanette (a solid Blair Brown), who is awaiting her own appointment confirmation to a cushy post and who has offered an oasis of friendship in the harsh dessert of DC politics. Her daughter, Jeanette's daughter, Rebecca (an underused Phillipa Soo), eyeing her own political career, might just be the "trump" card Chloe needs.

Pam MacKinnon directs, but leave little mark on the play, which, except for a couple of "House of Card" twists, is a rather uneventful hour and a half. Willllimon's also wrote the play Farragut North and "Ides of March." the film based on it.

"La Parisienne," Henri Becque's controversial play which debuted in Paris in 1885, and which inspired this work commissioned by The Flea Theater in New York City, also was the basis for a 1957 movie starring Brigitte Bardot. I guess sex, politics and intrigue will never go out of style. This production has a lot of the latter -- style, that is. Derek McLane's sets are classy and Jane Greenwood provides ample costume to keep things interesting (while Broken Chord supplies Original Music and Sound Design for the changes).