Broadway Blessing is a Blessing

The annual Broadway Blessing ushered in the new season on the Great White Way with song, dance, talk and tributes. Chita Rivera honored Hal Prince. The Actor's Chapel at St. Malachy's was standing room only for the event produced by Pat Addiss and Kathryn Fisher. 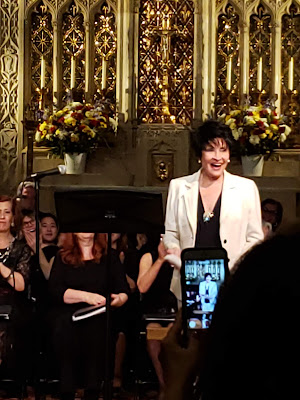 Chita Rivera gave a tribute to Hal Prince.. whom she said
"shaped a very large part of my life." 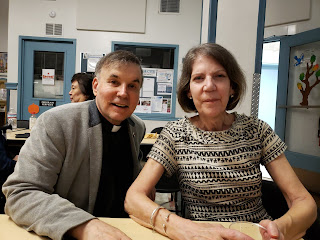 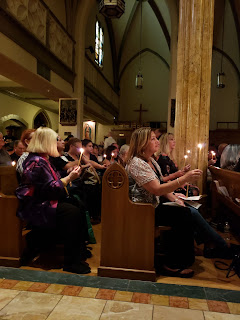 A candle lighting and sing-along concluded the service. 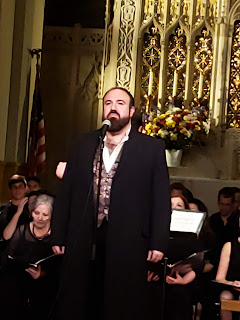 "The Sabbath Prayer" from Fiddler presented by Adam Shapiro. 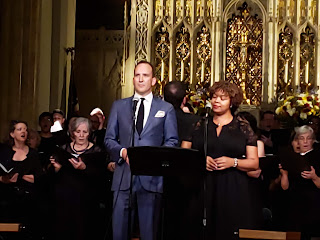 Stephen Carlisle from The Lion King and Liseli Lugo and with the Broadway Blessing Choir
sing "The Circle of Life." 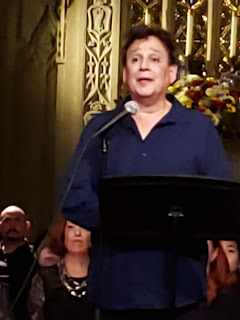 Sydney Meyers sings "Something Happened" by David Friedman from Jane Doe No More. 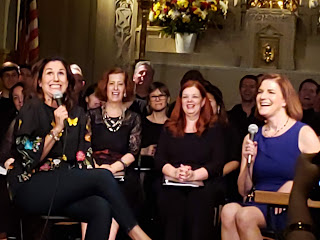 Roma Torre, right, interviews Cher star Stephanie J. Block, left, who shared how faith helps her strive toward making the word a better place. Her priest encouraged her to take the role of Cher. 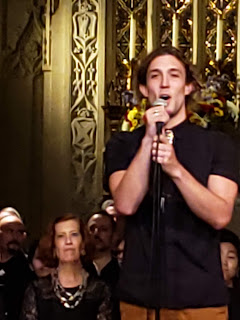 Conor Ryan sings "It's Good to Be Alive" from Desperate Measures accompanied
by composer David Friedman.
Posted by LaurenYarger at 5:49 AM No comments:

Posted by LaurenYarger at 9:33 PM No comments:

By Harold Pinter
Directed by Jamie Lloyd
Bernard B. Jacobs Theatre
Through Dec. 8, 2019

By Lauren Yarger
What's It All About?

Tom Hiddleston, Zawe Ashton, and Charlie Cox all making their Broadway debuts in Harold Pinter's study of betrayal. Hiddleston plays Robert, who discovers that his wife, Emmy (Ashton), has been having an affair with his best friend, Jerry (Cox), for seven years. Multiple layers of betrayal emerge and the actors, directed by Jamie Lloyd, dig deep for the emotions felt by their characters.

What Are the Highlights?
Strong performances. Even though the characters aren't very likable (Emmy seems to enjoy feeding her ego at the expense of the two men; Jerry has no problem sleeping with his best friend's wife; Robert appears not to care much that he has...  Hiddleston ("The Avengers") does give a hint of the inner turmoil his character feels when learning of the betrayal,  but the character, for reasons unknown to us, never really expresses it.

What Are the Lowlights?
The play doesn't really go any where and a confusing reverse chronological order to the action makes it difficult to follow what happens when (I know it is reverse chronological order, but if I didn't, that technique would not always be apparent). Information about what took place six years ago, two years ago requires the viewer to do mental math to try to see whether the years are sequenced correctly and it doesn't always seem like they are.

Set Design by Soutra Gilmour (who also designs the costumes) is stark -- a few pieces of furniture -- so prop placement is noticeable and distracting. Why are those drinking glasses downstage? Why are other props pantomimed? Why am I asking these kind of questions? Because the plot doesn't hold interest.

This production formed the culmination of Pinter at the Pinter, an unprecedented London season of Harold Pinter’s work taking place over the 2018/19 season. This project consisted of more than 30 pieces. Marking the 10th anniversary of Pinter’s death, Betrayal played in the West End theater that bears his name, breaking all box office records.

Family-Friendly Factors:
God's name taken in vain.
Posted by LaurenYarger at 6:06 AM No comments: