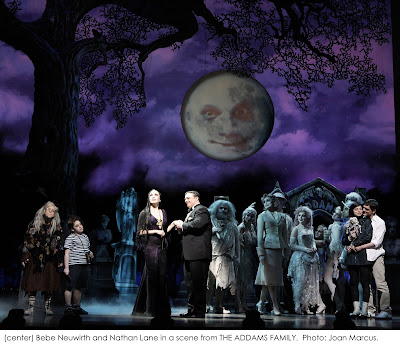 Scary, but Not in the Way You’d Think
By Lauren Yarger
Be afraid. Be very afraid. Not because the Addams are a strange, dark family where torture, the macabre and visits from dead relatives are the norm. Be scared, instead, because if a musical with so much potential -- full of beloved, iconic characters starring stage legends Bebe Neuwirth and Nathan Lane with choreography from the excellent Sergio Trujillo and a book penned by Marshall Brickman and Rick Elice -- can fail this badly, then trying to scare up investment dollars for future Broadway musicals might be a frightening proposition indeed.

The Addams Family has been a cult hit for years, starting in the 1930s with the New Yorker magazine cartoons of Charles Addams. He depicted the zany antics of childlike Gomez (Lane) and his wfie, Vampire-like Morticia (Neuwirth), their guillotine-loving daughter Wednesday (Krysta Rodriguez), their son Pugsley (Adam Riegler) who likes to blow things up, the Frankenstein-like butler, Lurch (Zachary James), whacky witch Grandma (Jackie Hoffman) and Uncle Fester (Kevin Chamberlin) whose hobby is illuminating light bulbs in his mouth. If none of that makes any sense to you, you probably weren’t a fan of the hit 1960s TV series or the more recent Hollywood film and its sequel based on the darkly humorous family.

While the TV show was funny and the films were a perfect homage to it with perfect re-casting of all the main characters, the latest incarnation on Broadway is an unworthy successor. The creators’ biggest mistake was to focus on its being a musical rather than on the unique characters and situations available to them to tell the story. The music and lyrics by Andrew Lippa, are not bad, they’re just not memorable, so you have to wonder why the two-and-a-half-hour-plus show is chock full of them (20 to be exact, nine of them group numbers), especially when there’s so much ready-made dialogue and humor begging to get some stage time.

Brickman and Elice, whose excellent book kept Jersey Boys from being just another juke-box musical, get to write a few funny lines in between the songs and draft a loose plot around the Addams clan trying to act “normal” when Wednesday’s boyfriend and his parents come to meet them in their eerie mansion, which for some reason, is located in Central Park.

Lane and Hoffman (who gets most of the show’s laughs) make the most of what they have to work with. Lane, in good singing voice, is, well…. Nathan Lane. He’s funny, if not exactly Gomez Addams. He made me laugh out loud as the father lamenting how quickly his little girl had grown up. It seems just like yesterday, he tell us, that she was sealing up her baby brother in the wall or setting Jehovah’s witnesses on fire…. Funny stuff, but there isn’t enough of it before someone starts belting a song.

Is Wednesday in love? Let’s have a song. Does Pugsley feel abandoned by his sister? Belt it out (and little Riegler does have a nice voice). Not sure what to do at this point in the script? Add a tune. Is Morticia having a mid-life crisis? Sing about it, even if there doesn’t seem to be any reason for the music to cue up.

Even when she’s singing or dancing (with dance steps that aren't a match for her potential), Neuwirth, usually a stage-stopping comedian and entertainer, seems subdued, almost like she can’t wait to get off the stage and change out of her shroud (really unattractively designed with cleavage that “Goes down to Venezuela” according to Gomez). There is only one line the whole night that Neuwirth delivers with full vamping gusto, and I felt like I saw a ghost of what could have been.

Some of the trademark Addams running gags are included in the show, but some expected bits are missing (probably because the musical numbers take up too much time to put them all in).

For example, when Thing, the body-less hand, presents him with a little musical instrument, Fester doesn’t respond with the expected, “Thank you, Thing.” When Lurch goes to answer the door to welcome Wednesday’s boyfriend, Lucas Beineke (Wesley Taylor), and his parents, Mal and Alice (Terrance Mann and Carolee Carmello), he simply opens the door and lets them in. Where is the “You rang?” line Lurch always utters or his forced taking of the visitor’s hat? Then, the show is almost over before Gomez passionately kisses his wife’s arm after hearing her speak French. A few seconds later, when Morticia bids the Beinekes “au revoir,” Gomez doesn’t react at all.

If you’re going to a cult classic, do it right! It's like doing a musical version of "Star Wars" and forgetting to have someone say "May the force be with you." The original directors reportedly were replaced after the show’s negatively reviewed pre-Broadway run in Chicago by veteran Jerry Zaks, who’s officially listed as a creative consultant. My guess, though,
is that by the time he took over, this mess was too far gone for him to make any significant changes before the Broadway run and the cast, unfortunately, seems aware of it.

Phelim McDermott and Julian Crouch, the original directors, created the very impressive, large sets (the best part of the production along with giant squid, carnivorous Venus fly trap and other delightful puppet creations by Basil Twist and special effects by Gregory Meeh).

The Addams Family plus Bebe Neuwirth plus Nathan Lane had such potential, but this production just doesn’t work. Advanced box office sales were strong, probably based on the Addams Family-Neuwirth-Lane factors, but it will be a little spooky if this show enjoys the long multiple-year run for which producers probably were hoping.

Christians might also like to know:
• Addams family ancestors are called forth from their graves and the ghostly characters make up the show’s chorus.
• Torture is depicted.
• God’s name taken in vain
• Language
• Some sexual dialogue and situations
Posted by LaurenYarger at 3:32 PM