Theater Review: A Cool Dip in the Barren Saharan Crick 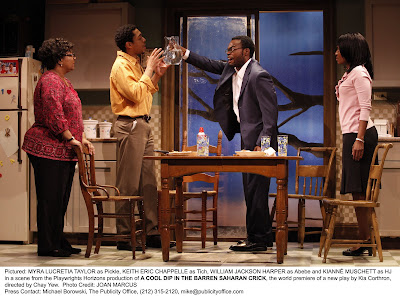 A Refreshing Drink of a Play
By Lauren Yarger
A Cool Dip in the Barren Saharan Crick, Kia Corthron’s new Off-Broadway play is self fulfilling. It’s a refreshing, satisfying drink of a play in a theater world thirsty for new works that offer some hope and solutions for problems instead of focusing on dysfunction in hopes of winning a Pulitzer Prize.

Cool Dip follows the life of Abebe (a delightful William Jackson Harper), one of the most positively portrayed Christian characters you’ll ever see on a stage. At once endearing and exasperating, he’s someone you wish you knew in real life, because your life would be richer for knowing him.

Abebe journeys from his native Ethiopia to rural Maryland to attend college, though he is unable to declare a major since he is torn between his first love: preaching God’s word and becoming a pastor, and his second love: water studies which would offer him a way to help his drought-plagued village. Will he save the planet, or the souls on it? He tries to do both.

His host family is a godsend to orphaned Abebe. Pickle (Myra Lucretia Taylor, in a stand-out performance) and her daughter, H.J. (Kianne Mashcetti), make him feel right at home and play guinea pigs as he practices his sermon-giving and baptism-dunking techniques on them (a large favor on H.J.’s part, since she wants nothing to do with God).
Abebe tries to help Pickle, slowly losing touch with reality, through the grief of losing her father, husband and son in Hurricane Katrina. She hears their voices, inventively brought to life by set, lighting and sounds designers Kris Stone, Ben Stanton and Darron L. West. Abebe also attempts to help H.J. get back with her estranged boyfriend, Tich (Keith Eric Chappelle), and becomes a Big Brother to Tay (an adorable Joshua King), a young boy left mute by the trauma of witnessing his father murder his mother and sister.

Trying to deal with all of these emotional situations causes Abebe to realize that in many ways, he is a missionary, only in reverse. He’s a missionary from Africa, sent to save the souls of Americans. Abebe has his own ghosts to deal with, as well: his family and an adopted stepbrother, all lost because of the lack of safe drinking water in his village and the disastrous corporate attempts to profit by building a dam. He’s also haunted by the dawning truth that wherever he starts a good work, his efforts seem to go barren.

Corthron steers the theme of water as a nourishing and life-threatening force throughout the play, both metaphorically and directly, with many conversations hinging on bottled water vs. tap. Water even enters into Abebe’s no-nonsense, yet humorous preaching. Water is used in the practice of many non-Christian religions, he tells us, but they will have a surprise in the end because there “isn’t much water in hell.” Now some will be offended by that but if you heard Abebe 's conviction while speaking in his innocent, African-accented, endearing way, you'd probably smile.

The plot, though sometimes disjointed in trying to grapple with so many subplots, ripples with engaging characters, realistic, yet supernatural events, lots of God’s word and hope to bring a satisfying, thirst-quenching play to the stage. It's most welcome.

All of the actors, directed by Chay Yew, give exceptional performances. Cool Dip runs in a limited engagement through April 11 at Playwrights Horizons, 416 West 42ns St., NYC. For tickets, call 212- 279-4200.