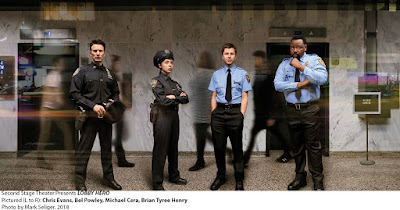 The play,  by Kenneth Lonergan, (This is Our Youth; 2017 Academy Award for  "Manchester by the Sea," follows the interactions of folks in the lobby of a New York apartment building. Naive and awkward security guard Jeff (Michael Cera) always manages to say just the wrong thing under the guise of humor. His no-nonsense boss, William (Brian Tyree Henry), gives him a chance despite his past financial issues and eventually confide in him about what has him stressed: his brother may have been involved in the rape and murder of a woman and has has given the police a false alibi -- that he was at the movies with William.

Jeff betrays some of that trust trying to impress Dawn (Bel Powley), a rookie cop with whom he is smitten. Meanwhile, Dawn might just be able to use the information to solve some of her own problems with her arrogant, senior partner, Bill (Chris Evans). She slept with the attractive cop and now he has a hold over her. Does she want him to back her up in an incident where she might have used excessive force in subduing a suspect? Then she had better continue putting out on demand. And if he wants to spend time on a shift having sex with another women who lives in the apartment building, then she had better wait patiently for him in the lobby and keep her mouth shut.

Dawn feels like it is her fault that she finds herself in an impossible situation. After all, she shouldn't have slept with the married cop in the first place, she knows, and now he can manipulate her and end the career she has worked so hard to begin. Can Jeff father in his father's steps during the war and become an unlikely lobby hero who saves the day?

The play, though predictable throughout its two and a half hours, explores current topics while raising questions of choices and principles, especially when emotions and pressure is involved. Henry creates a layered character, as we discover a man who is conflicted about lying to the police, but who wants to protect his brother -- who might well be innocent --  from the realities awaiting an African-American man who gets lost in the prison system. Cera is a charming mix of naive and annoying and Evans is, unfortunately, a realistic portrayal of sleazy, confident testosterone. Powley, unfortunately, shouts most of her lines, leaving the character at one level. We're never really sure why she make the choices she does.