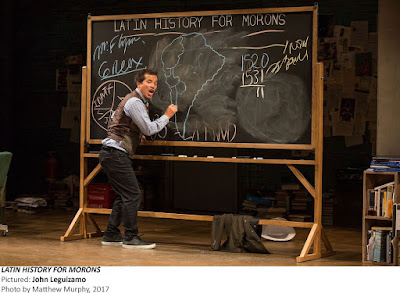 
By LaurenYarger
The teacher charts out lessons about civilization on a large blackboard center stage, but you probably never have been in a classroom quite like this one.

The "teacher" is John Luguizamo (Ghetto Klown and Freak) and the lesson is Latin History for Morons, and yes, we, the audience, are the morons (especially if you are White). The raw, bawdy monologue was born from the frustration Laguizamo encountered trying to help his son find a Latin hero to write about for a school project. A quick check of the boy's history book showed that no Latin Americans were included.

"If you don't see yourself outside of yourself, you feel invisible," he said.

The comedian shares his research on the subject and takes us through a different look at history and how the Latin People, who once enjoyed various empires and a population in the millions on several continents for 3,000 years, were systematically wiped out through disease and conquests by White western civilizations. He explains "ghetto rage" is what Latin-Americans experience when they feel they don't matter.

"Latin life is cheap in America."

He adds some political commentary against the Trump administration's anti-immigration policies.

The presentation is raw and filled with vulgar language, though many of the biggest laughs greeted dialogue in Spanish, so I missed those jokes. At one point there was a disruption in the balcony and the performer maintained character while alerting that police were really needed -- that he wasn't joking. This isn't your usual Broadway crowd at Studio 54 -- lots of people were talking and enjoying drinks throughout the performance. Think nightclub.

Leguizamo is an engaging performer and I enjoyed Ghetto Klown, but this show just didn't strike me as very funny. Perhaps the seriousness of the subject doesn't lend itself to many laughs. The dialogue also deals with his son's bullying at a private school where parents display prejudice.

Latin History for Morons is extended at Studio 54, 252 West 54th St., NYC through Feb. 25. Performances are Tuesday, Wednesday, Thursday at 7 pm; Friday and Saturday at 8 pm; Wednesday and Saturday at 2 pm; Sunday at 3 pm. Tickets are $55-$149: latinhistorybroadway.com.