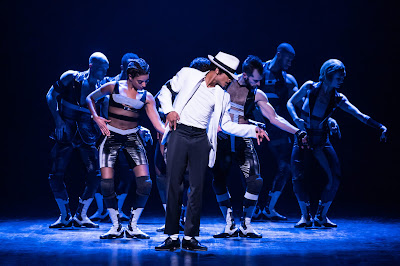 By Lauren Yarger
If you like the music of Michael Jackson and non-stop, amazing choreography by Christopher Wheeldon (An American in Paris), who also directs, you probably will like MJ, a musical detailing the staging of the pop legend’s Dangerous Tour.

If you are looking for a balanced telling of the troubled boy/man who was accused of sexually abusing young boys, the book from Pulitzer-Prize winner Lynn Nottage acquiesces to the sentiment spoken by Michael early in the production of his tour: “I want to keep it about my music.”  So the story tips in favor of creating sympathy for him and barley touches on the events which make us question whether this is really a person who should be glorified with a Broadway musical in the first place (presented by Lia Vollack and the Estate of Michael Jackson).

It is present day 1992 in the Los Angeles rehearsal studio (Scenic Design by Derek McLane; Lighting Design is by the always-excellent Natasha Katz) where Michael (played by Miles Frost in his Broadway debut) and his hardworking cast and crew are trying to put together dance routines and video footage that seems almost impossible for the time. He is switching up beats, leaving old standards behind and wanting to perform stunts like popping from a toaster (he does this in the production) and flying in a jet pack (disappointingly, he does not pull off this feat in the Neil Simon Theatre after talking about it often during the two hours and 40 minutes of the script….). The soaring expenses have his creative and financial managers urging him to use caution. But Michael wants to give his fans a show beyond their expectations, and he want to make sure Dangerous and the new songs will put him at the tops of the charts. He decides to mortgage his beloved sanctuary home, Neverland, to make it happen.

Sorry, but it is hard to feel too sorry for a man torn by the possible loss of the place where he is accused of abusing little boys. A scene at the beginning of the show where he beckons to a young boy (who turns out to be his younger self) and takes his hand also is kind of creepy. Leaving this out of the show doesn’t mean images have been erased from our minds. In another attempt to gain sympathy Michael explains that his change in skin pigmentation is due to a medical condition, not his desire to be whiter. Does it really matter since we’re not really doing a full biography here?

Interspersed (through dialogue, dance and songs – excellently directed, orchestrated and arranged by Jason Michael Webb along with David Holcenberg) are Michael’s memories growing up with a driven, abusive father, Joe (Quentin Earl Darrington plays both Joe -- very hard to understand him-- and Michael’s manager Rob -- no problems with elocution --, an enabling mother (Ayana George) and the rest of the jealous Jackson Five. (His sisters, by the way, don’t get a mention). Two younger versions of Michael are played by extremely well byTavon Olds-Sample and Walter Russell III and Christian Wilson.

The rehearsals are being filmed by MTV reporter Rachel (Whitney Bashor) and bumbling cameraman Alejandro (Gabriel Ruiz). She soon begins to wonder how dependent Jackson is on pills and picks up a very stressed vibe among all the people around Jackson in the room.

Frost is great. Looks, moves and sounds like Jackson (though that little boy, shy whisper is as annoying as it was in real life.) The show is packed with more than 40 of the singer’s tunes and some of his best dance moves. Costume Designer Paul Tazwell recreates the look, down to the sequined glove (which was auctioned after the show to benefit Equity Cares, Equity Fights Aids).

COVID PROTOCOLS
Proof of vaccination and masks are required. https://broadwaydirect.com/theatre-policies

Posted by LaurenYarger at 1:44 PM