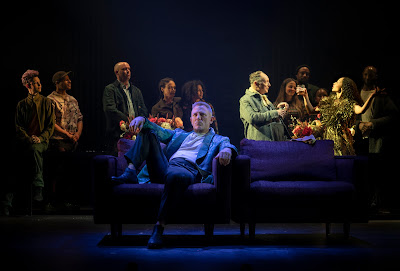 Fair is foul, and foul is fair, Hover through the fog and filthy air...

By Lauren Yarger
Something's foul, all right: it's the latest rendition of Macbeth featuring retiring James Bond film star Daniel Craig. Maybe it's the imagined stench from the disgusting cauldron in which the witches brew blood, human flesh and heaven only knows what else. More likely, it is just the smell of money and the staging of a royalty-free Broadway show with a star in it just to cause traffic at the box office. Because there can be few other reasons for mounting this production full of poor choices directed by Sam Gold.

Costume Designer Suttirat Larlarb throws some dressing gowns and large coats on the actors (making sure we get a chance to admire Craig's chiseled physique) as they walk around a bare stage with no sets, sans a few oversized comfy chairs, a very long table and some other props -- a real waste of Scenic Designer Christine Jones's talent. Macbeth (Craig) and his wife (a solid Ruth Negga in her Broadway debut) plot murder to gain power, then can't live with the guilt. I will leave you to Cliff notes if you aren't familiar with the Shakespeare classic tale of ambition and power that gives us the quote:

"Life’s but a walking shadow, a poor player
That struts and frets his hour upon the stage,
And then is heard no more. It is a tale
Told by an idiot, full of sound and fury,
Signifying nothing."

This quote is appropriate for this production as almost none of the choices made mean anything, including:

COVID PROTOCOLS
All guests must wear a properly fitting mask over the nose and mouth in the theatre except when eating or drinking in designated areas. Guests who do not comply with these policies will be denied entry or asked to leave the theatre.

Posted by LaurenYarger at 5:21 PM