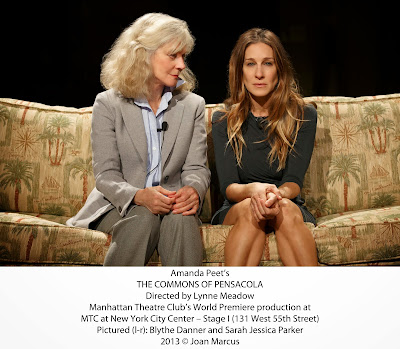 What's It All About?
Blythe Danner and Sarah Jessica Parker reunite ( they previously starred together in MTC’s 1995 hit production of Sylvia by A.R. Gurney), for a play that explores the strength of family ties. Judith (Danner) has been forced to leave her luxurious New York life after her husband’s Wall Street scam becomes headline news and the talk of gossip columnists everywhere. When her daughter, Becca ( Parker), and Becca’s filmmaker boyfriend (Michael Stahl-David) pay Judith a visit to the one bedroom condo the medication-taking Judith now occupies in Pensacola, FL, everyone’s motives are called into question. The situation is compounded by a housekeeper ( Nilaja Sun) being paid under the table and a visit from Judith's estranged daughter, Ali (Ali Marsh), and granddaughter, Lizzy (Zoe Levin), who makes an alarming discovery in the kitchen that could bring more dark clouds than the approaching hurricane.

What are the Highlights?
A well written script, interesting characters and fine acting. Makes us ask the question, "What would you do?"

What are the Lowlights?
None

Christians might also like to know:
-- Lord's name taken in vain
--Language
-- Sexual dialogue
Posted by LaurenYarger at 3:35 PM No comments: