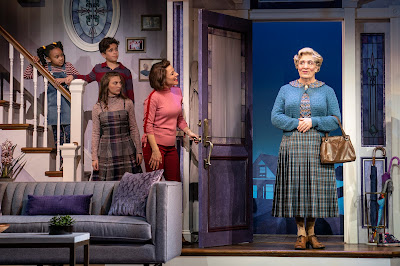 Hey, poppets! Get on over the Sondheim Theatre for one of the most fun, family-friendly musicals on Broadway. It’s Roundabout Theatre Company’s Mrs. Doubtfire inspired by the 1993 movie starring Robin Williams with book, music and lyrics from the team who brought us the fun, zany comedy musical Something Rotten!.

Here Rob McClure (who delighted in Something Rotten! and Chaplin)  stars as Daniel Hillard, a down-on-his luck father who loses custody of his children when his wife, Miranda (Jenn Gambatese),finally gives up and divorces him. Her career is just taking off with a fashion line for working/active women, so she needs a nanny to help with the kids, Lydia (a really terrific, full voiced Analise Scarpace), Christopher (Titus Landegger and Tyler Wladis) and Natalie (Austin Elle Fisher and Ava Gail Prince).

With the help of his brother, Frank (Brad Oscar, another Something’s Rotten alum), and his husband, Andre Mayem (J. Harrison Ghee), Daniel transforms himself into a grandmotherly woman from Scotland, Euphegenia Doubtfire, and applies for the job. The normally chaotic Hillard home is transformed into well-run, love-filled haven under the no-nonsense, loving housekeeper. Miranda discovers a new friend and confidant in Mrs. Doubtfire and Daniel is forced to hear the truth about his marriage and his ex wife’s growing affection for the handsome and rich Stuart Dunmire (Mark EVans) who is boosting Miranda’s career.

Desperate to take control of his life and have one more shot at being in his kids’ lives, Daniel takes a janitor’s job at a local TV station where Mr. Jolly (a side-splittingly funny Peter Bartlett) does his best to entertain children. Free-spirited Daniel gets a crack at his own show if he can just figure out how to make that work while juggling being Mrs. Doubtfire and Daniel Hillard while keeping suspicious social worker Wanda Sellner (a fantastic Charity Angél Dawson thrilling with a heavenly voice) at bay.

As you might imagine, chaos ensues and there is a drive-by fruiting (Book by Karey Kirkpatrick and John O’Farrell). It’s really a lot of laughs with the king of fun, big musicals, Jerry Zaks, at the helm. Some of the most iconic parts of the movie are in there if not as excellently executed and some musical numbers seem superfluous (Music and Lyrics by Wayne Kirkpatrick and Karey Kirkpatrick). Choreography is by Lorin Latarro. I remember thinking the music was pleasant, but I honestly couldn’t remember a tune after leaving the theater.

A few politically-correct changes to the script have Daniel’s child frightened discovering Dad's face comes off instead of male parts (instead of female parts) in the rest room, and Frank and his husband are touted as the epitome of a happily married couple looking to adopt a child (instead of the brother being a rather zany drag queen). The big theme and the ending number is all about forgiving, accepting yourself and being happy “As Long as There is Love.”

McClure is terrific in the role and no comparison with Williams in necessary. He makes the role his own through a lot of hard work in a high-action role where he rarely is off stage (I saw him vamp through a tech glitch on top of everything else) and a lot of very fast costume changes. His morph from Daniel to Mrs. Doubtfire and back again is made possible by some costuming from designer Catherine Zuber and Make-up and Prosthetics Designer Tommy Kurzman. All of the attention and effort must have gone into the iconic look of Mrs. Doubtfire, however, as the rest of the costumes are surprisingly sub-par and unflattering.

It's a fun time at the theater and I saw lot of kids the day I attended, though I might suggest a PG-13 rating. Mrs. Doubtfire entertains for two hours and 30 minutes at the Stephen Sondheim Theatre, 124 W 43rd St., NYC. mrsdoubtfirebroadway.com

Posted by LaurenYarger at 2:50 PM