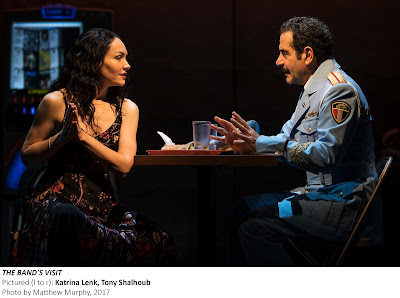 The Band's Visit
Music and Lyrics by David Yazbek
Book by Itamar Moses, based on the film by Eran Kolirin
Choreographed by Patrick McCollum
Directed by David Cromer
Ethel Barrymore Theatre

By Lauren Yarger
Like streams in the dessert, The Band's Visit quenches a thirst for something satisfying on Broadway and it's different than any other drink being offered on the Great White Way.

First off, this musical doesn't feel like a musical. The score by David Yazbeck (The Full Monty, Dirty Rotten Scoundrels) seems a natural part of the story, which follows an Egyptian police orchestra on its way to perform in a dedication ceremony in Israel. So when the musicians pick up their instruments, or the characters express themselves by singing a song with beats that sound conversational, it is an extension of themselves thanks to expressive lyrics (also by Yazbek) and a well-written book by Itamar Moses, based on the 2007 movie by Eran Kolirin. This production makes a smooth transfer to Broadway of the acclaimed Off-Broadway world premiere last year at the intimate Atlantic Theatre Company, where it was sold out for most of its run.

When the band members arrive in Israel, they discover they are in Bet Hatikva, not Petah Tikvah, home of the Arab Cultural Center, the opening of which they have come to celebrate. Bet Hatikva not only doesn't have a cultural center, it doesn't have much of anything. That’s the word from Dina (Katrina Lenk, who undoubtedly will be nominated for a Tony award for her splendid performance), owner of a cafe which is one of the few non-apartment buildings in the area.

"Not Arab culture, not Israeli. Not culture at all," she tells Tewfiq (a wonderful Tony Shalhoub). "Welcome to nowhere."

Because there is no bus out of town until the next day and no hotel in the area, Dina provides dinner for the band and commandeers her neighbors into putting the members up in their homes.

A welcome mat is rolled out for the Egyptians to join the Israeli's on a typical evening in Bat Haitikva. Simon (Alok Tewari), shares his unfinished musical composition and brings peace to the home of Itzik (John Cariani) and Iris (Karen Sieh), who isn't sure she can deal with the demands of a new baby and no sleep. Meanwhile, Haled (Ari'el Stachel), who was responsible for the mix up in their travel plans, tries to avoid Tewfiq's relentless disapproval and seeks out a good time at the local roller rink. He offers advice (rather humorous) on picking up girls to Papi (Etai Benson), who is smitten with Julia (Rachel Prather), but is unable to work up the nerve to speak with her.

Creating this world, with the help of a revolving stage designed by Scott Pask, is Director David Cromer, who works his magic to bring the audience into the intimate world of the characters. We feel for one character, known only as the Telephone Guy (Adam Kantor), who waits endlessly at a payphone for a call from his love. We're not sure exactly why he thinks she will call, or why it is so important that she does, but we really want that phone to ring.

Meanwhile, despite appearing to be dry from years of wandering in an emotional dessert, complete with failed relationships with men she probably shouldn't have been involved with in the first place, Dina finds herself drawn to the mild, polite Tewfiq. He touches a part of her she hasn't visited in a while -- a hope she felt when watching old romantic movies on TV. As she wonders whether Tewfiq might be the one she has been waiting for all these years, she sings a mesmerizing ballad, "Omar Sharif."

Dina is sitting at the table talking with Tewfiq, but Lenk rises to present the song in an almost ballet movement that allows us to see the thoughts crossing her mind (choreography is by Patrick McCollum). Tyler Microleak’s exceptional lighting design highlights Dina and in a less pronounced way, Tewfiq, but also lets us see the other characters in the shadows of the restaurant as they mimic her arm movements. The effect is a stunning "time-stands-still" moment which no one does better than Cromer. And that ballad triggers a never-ending earworm once you hear it (sample a clip in the video below).

If the performances and music weren't enough to make this a top pick (probably of the season), there are some bonuses as well. The story is about people. Regular, decent people who open up and share with each other. In a plot that could have focused on politics since we have Jews and Arabs interacting there isn’t any. Even with communication difficulties brought on by language barriers. What a welcome respite -- like a stream in the dessert.  Many playwrights and directors seem to think they have carte blanche to bash politicians they don't like, even if doing so doesn't add anything to the show. They should take a lesson from The Band's Visit, which in its silence about politics, says more about the good of humanity and the ability for people from different backgrounds to get along than any Trump bashing could, for example.

A second bonus is that the musicians who are on stage are really, really good. The Broadway production includes some more instrumental parts in the score (orchestrated by Jamshied Sharifi) which allows the musicians to improvise. Don't leave at the curtain call, or you will miss a terrific encore.

FAMILY-FRIENDLY FACTORS:
-- God's name taken in vain
-- Language
-- Recommended for 12 and up

Posted by LaurenYarger at 4:58 PM