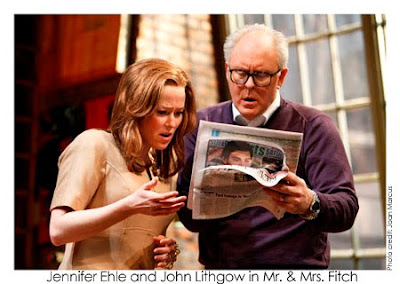 Some Gossip Columnists Worth Hearing
By Lauren Yarger
Two gossip columnists who find themselves on the outs with who’s in invent an interesting celebrity to put them back on top of their newspaper column writing game, but when the plan backfires, Mr. and Mrs. Fitch might just salvage something more important than a job -- like their marriage.

Douglas Carter Beane’s delightfully droll Off-Broadway play stars John Lithgow and Jennifer Ehle as the titled characters, a couple of literary erudite people who show their affection by trading sarcastic, sardonic and scintillating barbs. Needing a “humdinger” of a column to satisfy his editor and avoid being fired, Fitch, helped by his muse of a wife, invents Jamie Glen, a mysterious celebrity who soon has all of New York wanting to know more about his supposed romantic liaisons. The Fitches, as the sole providers of this information, soon find themselves the toasts of the town, but is that what they really want?

In the middle of trading literary quotes, impersonating F. Scott and Zelda Fitzgerald and trading witty repartee, the couple finds something else: the love that brought them together. It’s a charming look at two people made for each other (believe me, no one else could stand them), and discovering what really matters.

Lithgow and Ehle, directed by Scott Ellis, give solid, affecting and humorous performances. Their bold red Manhattan apartment (except for the horrid lime green hallway, the result of deciding on a paint color during a night of too much partying) is designed by Allen Moyer and is nicely lighted by Kenneth Posner. Costume designed Jeff Mahshie dresses the couple in elegant party clothes for the social scene, but has Ehle in pajamas and dresses cut from unnatural looking fabrics and they are distracting.

Mr. and Mrs. Fitch is the best way I can think of to enjoy a gossip column. It plays at Second Stage theatre, 305 West 43rd St., NYC, through April 4. For ticket information visit http://www.2st.com/.

Christians might also like to know:
• Language
• God’s name taken in vain
Posted by LaurenYarger at 6:13 PM