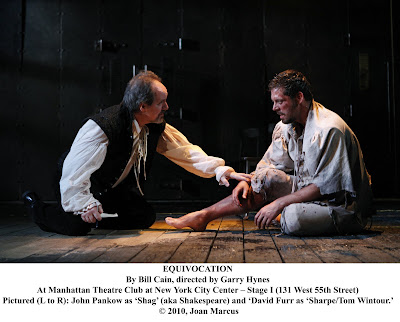 The Play About the Play Within the Play’s the Thing. There's No Equivocating on That
By Lauren Yarger
Terrific performances by John Pankow as William Shakespeare and a strong ensemble cast playing multiple roles to portray members of his Jacobean acting company, conspirators in the Gunpowder Plot and various royals and politicos trying to cover up what really happened make for some fabulous theater in Manhattan Theatre Club’s Off-Broadway production of Equivocation.

The brightest star of the play, however, is its author Bill Cain, who skillfully weaves history, intrigue and language of the Bard to tell one of the most satisfying tales on a NY stage this season.

Shag, short for Shagspeare (there are a number of different spellings of his name), has been commissioned by Secretary of State Sir Robert Cecil (David Pittu) to write a play about the Gunpowder Plot, an attempt in 1605 by Catholics to blow up Parliament and assassinate Protestant King James I (David Furr). It seems like easy money for The King’s Men, the acting troupe performing Shakespeare’s plays at the Globe Theatre and at court.

Ah, but here’s the rub: the story on which the play must be based has been written by the king himself and it isn’t based on truth. It’s what those in power would like adopted as the official version. They agree that Shag, whom Cecil thinks is so talented that his works might still be read 50 years hence, should be the one to write it and while he’s at it, James would some witches added just for fun. Furr is equally entertaining playing the spoiled king and Sharpe, a conceited actor in the troupe.

Shag tries to write the play, but finds a lot of the facts don’t hold up under scrutiny (and even today there are unanswered questions about what happened and who really was involved. Visit http://www.gunpowder-plot.org/). Where did Guy Fawkes and a bunch of working class men get all that gunpowder and how did they dig tunnels to plant it underneath Parliament without removing any dirt for instance? In fact, there doesn’t seem to be evidence of a plot at all. Shag sneaks into prison to question tortured co-conspirator Thomas Wintour, but still can’t find any answers.

Also unable to provide any insight is another accused co-conspirator, Father Henry Garnet (Michael Countryman), head of the Jesuits and the last of the “old faith” priests. Garnet writes a pamphlet called “Equivocation” which, according to his critics, teaches persecuted and imprisoned Catholics how to lie under torture, but which, according to its author, explains rather “how to tell the truth in trying times.”

Shag tries to master the art of equivocation so he can write a play that will please the king without rewriting history. The result is really very clever. Cain deserves to take a bow along with the wonderful ensemble directed by Garry Hynes, because, really, the play’s the thing here. Rounding out the troupe is Remy Auberjonois and Charlotte Parry, the only actor besides Pankow playing a single role as Shag’s neglected and unappreciated daughter Judith who obsesses with doing the troupe’s laundry and with ridding her father’s works of boring soliloquies.

Francis O’Connor designs the brooding metal set and costumes that ingeniously appear to be modern and of the period simultaneously. Likewise, Cain’s uses today’s language, yet mixes in enough iambic pentameter to sound like the bard. Get over to the Globe …. I mean New York City Center, and catch this one before it closes March 28.