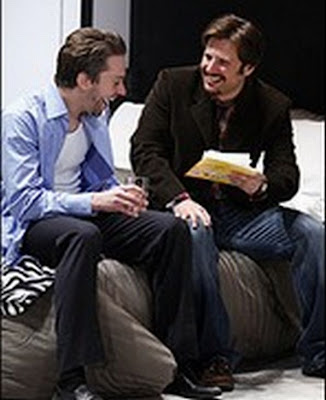 Where Do Relationships Really Begin and End?
By Lauren Yarger
Two old friends get together for an annual weekend of debauchery in Atlantic City, but one of the men’s reluctance to join in the usual sex, drugs, gambling and drinking games this time around tests the boundaries of their relationship as well as how they define themselves in Gabe McKinley’s play Extinction Off Broadway.

Wealthy Max (Michael Weston) offers to bankroll the fun when Finn (James Roday) reveals that he has been wiped out trying to save his mother’s failed restaurant. Max offers money to finance his friend's graduate studies, orders room service and provides alcohol and cocaine in bulk to get Finn in the party mood, but it doesn't work. Finn confesses that he has married a woman they knew in college and that they are expecting a baby. He wants to turn over a new leaf and somehow, competing in a contest with Max where their conquests are assigned points – three points for single women, five for those who are married – just doesn't appeal.

Max is hurt, not only by Finn’s decision to embrace a more traditional life, but because Finn unexpectedly didn’t invite him to the wedding, let alone ask him to stand as best man. He decides to forgive and forget – well, at least to forget everything Finn has said – and asks the prostitute he has purchased for the evening to bring a friend along as a surprise for Finn.

Prostitute Missy (Amanda Detmer) dominates her relationship with the inexperienced Victoria (Stephanie E. Frame) much in the same way Max dominates his with Finn, and she coaches the recently unemployed girl about how to solve her financial problems by being with Finn.

The women try to remain pleasing even while the hostility between the men smolders, then bursts into a conflagration when a game of “remember when” turns ugly. Director Wayne Kasserman skillfully places the actors and brings out performances that show the progressively unattractive side of both men. The clever set designed by Steven C. Kemp (lighting design, Mike Durst) keeps the action in the two men’s hotel rooms separate, but simultaneously viewable. When the two women are left on their own for a few minutes, we discover that their relationship with each other and how they define themselves individually are just as vulnerable to extinction as those of their “dates.”

Roday flings humorous one-liners back and forth with Weston, who ironically happens to be a real-life friend from their NY University days as is McKinley, but the actor sounds nothing like his popular Shawn Spencer character on the hit TV show "Psych," despite the fact that Shawn and his sidekick Gus often share the same kind of banter. (Dulé Hill who plays Gus also happens to be a producer on Extinction and to complete the old-home week theme, Weston also guest starred on an episode of "Psych.") At the curtain call, I could see Roday physically remove himself from the character of Finn in evidence of some great acting.

Though the subject matter is difficult, McKinley injects a lot of sharp humor throughout. He also offers some implied morality about the consequence of some of the poor decisions the men make, about how avoiding temptation probably is the better choice and about how some decisions can come back to haunt you. It’s the type of play that lends itself to lots of discussion after the final curtain. The script also offers a thought-provoking surprise ending.