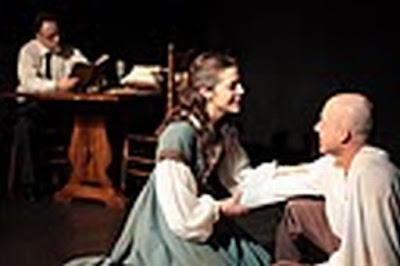 Kevin Hart, Catharine Pilafas and Ami Dayan
Spanish Inquisition's Interrogation Prompts Modern Counterpart
By Lauren Yarger
The confession of a 15th century priest about his secret marriage and his subsequent martyrdom plays out against a 20th century professor’s arrest for stealing the Inquisition’s records of the incident as Chicago Victory Gardens Theater presents the NY premiere of Oren Neeman’s Conviction Off-Broadway.

Neeman’s play, from the novel “Confession” by Yonatan Ben-Nachum, which won the 2001 Prime Minister Prize for Hebrew Literature, is adapted here by Ami Dayan and Mark J. Williams and plays out on a set doubling as a 1962 office in the Spanish National Archives and as a 1486 church confessional minimally designed by Jeremy Cole, who also directs.

The head of the archives, known only as Director (Kevin Hart), questions Israeli Professor Chaim Tal (Dayan) about his interest in the confidential document from the Inquisition. Director can’t figure out why this straight-forward confession of a priest would prompt such interest and make Tal risk arrest to possess it.

The modern-day interrogation continues and as Director rereads the aged pages from an interrogation hundreds of years ago, the story unfolds on stage with Dayan and Hart doubling as Priest Andreas Gonzales and his confessor, Juan De Salamanca, respectively. The Catholic priest no longer can hold the secret of his double life: he secretly has been married to a Jewish woman, Isabel (Catharine Pilafas), for more than a year.

The transition between time periods is well done, aided by some impressive quick-change costumes by Kevin Brainerd and original music by Jon Sousa and Yossi Green. Cole makes good use of the limited set and coaxes compelling performances from all three. A seductive scene between Isabel and Andreas is very artfully staged.

The script contains way too much exposition and is totally predictable, but Conviction is a very intriguing story enhanced by a very helpful printed program with a history lesson about the Jews and the Inquisition in Spain (most of which I had not known) and a glossary of Spanish and religious terms.