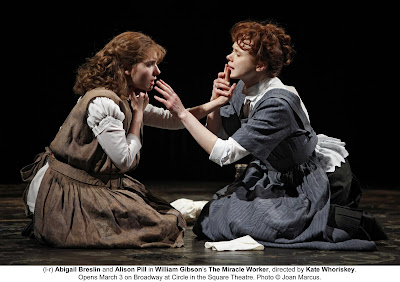 This Revival Doesn’t Work any Miracles, Unfortunately
By Lauren Yarger
William Gibson’s play The Miracle Worker about the efforts by teacher Annie Sullivan to reach young Helen Keller, trapped in a world of blindness and deafness, is a moving piece of drama. You can’t help sit in awe of Sullivan’s determination and rejoice when Helen finally realizes that the words her teacher has been spelling out in sign language on her hands actually mean something.

The original Broadway production starring Patti Duke as Helen and Anne Bancroft as Sullivan took a best play Tony. The stars reprised their roles in the screen version and in a popular TV remake years later, Duke took on the role of Sullivan opposite Melissa Gilbert, then starring in TV’s "Little House on the Prairie," as Helen. The play is beloved and is presented often at regional and amateur theaters around the country.

For its first revival on the Great White Way in 50 years, Alison Pill takes on Sullivan and film actress Abigail Breslin, best known for her roles in “Little Miss Sunshine,” “Raising Helen,” “Nim’s Island” and “Kit Kittredge: an American Girl,” makes her Broadway debut as Helen. Unfortunately, as directed by Kate Whoriskey, this production fails to work any miracles. In fact, Ivoryton Playhouse in Connecticut's recent production directed by Jacqueline Hubbard with Helen played by Jenilee Lea Simons Marques, who in real life is deaf, was far superior and might have have been a better choice for the revival.

Joining Pill and Breslin at Circle in the Square is Matthew Modine as Helen’s father, Captain Keller, the southern gentleman who is at first reluctant to bring an outspoken Yankee woman into his home as a governess/teacher for his wild and undisciplined daughter. He finally gives in to the pleas of his wife, Kate (Jennifer Morrison, whom fans of the TV series “House” will recognize), who hopes Sullivan will be able to teach Helen something and keep the family from having to send her to an asylum.

Adding more opposition is the Captain's estranged son, James (Tobias Segal), who resents everything, including the chaos Helen brings to the household, Kate, whom he thinks too easily replaced his own mother in the Captain’s affections, and Sullivan, who seems to know how to get the Captain’s ever elusive attention.

Haunted by memories of the death of her little brother, Jimmy (Lance Chantiles-Wertz), while they were orphan inmates in an asylum, Sullivan sees reaching Helen as a form of redemption and steadfastly works to find a way to communicate with her while convincing her parents to stop confusing pity with love and to let her enforce some discipline.

The real miracle in the play is not just that Sullivan accomplishes these goals, but also transforms the whole family in different ways. Whoriskey never gets the actors to go beneath the surface, however, so much of the production seems like a bunch of people just shouting lines at each other rather than a study of the relationships.

Elizabeth Franz, Yvette Gannier and Michael Cummings give nice turns in minor roles, but the leads fail to engage. Breslin appears very animated and aware of actors and actions around her, not detached and unaware as we would expect Helen to be. She doesn’t seem to need any help and Pill never emits enough of a feisty spirit to convince us that she does. Most difficult is Morrison’s appearing cold and unfeeling while reciting lines about how much she cares.

Meanwhile, Derek McLane (set design) no doubt had a challenge creating scenes on a three-step floor in the center of the theater in the round. His solution: lace trim forming an oval on the ceiling out of which fly pieces of furniture, door frames, windows and whatever else is needed to create a scene. It doesn’t work. The pieces remain attached to their cables for the duration of their stay and it’s awkward and distracting.

Skillful lighting by Kenneth Posner does help to create different scenic areas. It creates an other-worldly feel when the undergarment-only-clad Jimmy, pitifully thin and racked with convulsive coughs, visits Sullivan’s thoughts. (I prefer other productions, like the one at Ivoryton, where we just hear Jimmy).

Gibson’s play itself is worth a night at the theater, though, especially if you haven’t seen it before. There were a number of giggling young children in the audience and it’s about a “G” rated a play as you’ll see on a Broadway stage.

The Miracle Worker plays Circle in the Square Theatre at 235 W. 50th St., NYC. Discount tickets are available for friends of Masterwork Productions. Go to http://www.givenik.com/?code=Masterworks, click on the show, then indicate at left that Masterwork Productions is the religious charity you wish to support to see the special rates.