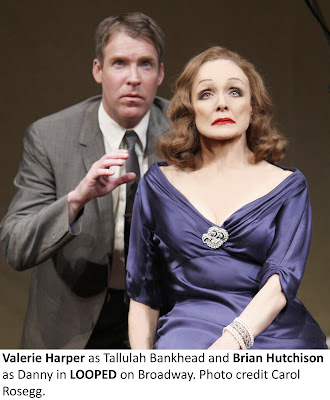 A Loopy Lady and a Very Funny Play
By Lauren Yarger
A 1965 LA recording session from hell is the setting for Looped, playwright Matthew Lombardo’s laugh-a-minute Broadway debut about the outrageous and larger-than-life screen actress Tallulah Bankhead, played with depth and gusto by Valerie Harper.

It seems that the audio from one of Tallulah’s lines in the film, “Die! Die! My Darling,” must be re-recorded (or looped) before the film can be released. It’s up to film editor Danny (Brian Hutchinson) and sound engineer Steve (Michael Mulheren) to make it happen, but that’s easier said than done.

Tallulah, a little looped herself, shows up under the influence and demanding a drink. What ensues is a hilarious battle of the wills between the brazen Tallulah and the uncomfortably uptight Danny with Steve staying out of sight as much as possible in his second-story sound booth (Adrian W. Jones, set design).

Tallulah, known for her promiscuity and sexual escapades (with both sexes) stops belting back drinks and snorting cocaine only long enough to unleash a torrent of sexually-charged, raunchily funny dialogue that unnerves Danny, who feels her remarks and behavior are inappropriate for the work environment (and perhaps for any environment . . .)

They take a break after numerous, hilarious failed attempts to record the ridiculous line, “And so Patricia, as I was telling you, that deluded rector has, in literal effect, closed the church to me.” When they return, the real drama begins.

Amidst the humor, Lombardo’s play and Harper’s engrossing performance also reveal the Tallulah beneath the surface: a very sad, lonely woman who forces herself to keep up the pretense of the over-the-top free spirit who externally would appear not to care what people think, or to be concerned that the doctors have told her she might not have long to live.

Danny sees through the act, though, and accuses Tallulah of using drugs and alcohol to avoid reality. Not to be outdone Tallulah zeros in on Danny’s most vulnerable spot – and the secrets behind why he married his wife. Lombardo gets applause for writing one of the most plausible “two strangers meet and share their most intimate thoughts” scene in a play and the two unlikely comrades find that they might not be so different after all.

Harper, directed by Rob Ruggiero, throws herself into the part and into the trademark “daaahhhling” type of speech made famous by Tallulah who inspired the creation of the characters Blanche duBois and Cruella de Ville, among others. Harper imbues Tallulah with a vulnerable and feminine depth that makes her more likable and human in the face of the onslaught of vulgarity. Her obnoxiously loud, over-the-top-laugh seems to embody all of the emotions ever felt by this woman and makes you want to laugh and cry at the same time.

Christians might also like to know:
• Language
• Sexually explicit dialogue
• Lord’s name taken in vain
• Drug use
• Bisexuality mentioned
• Show posts a Mature rating
Posted by LaurenYarger at 8:38 AM