Theater Review: A Behanding in Spokane 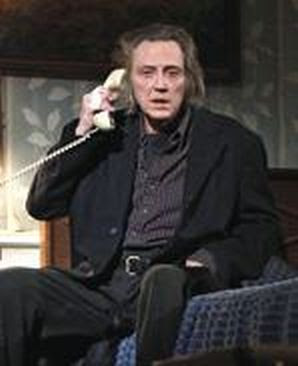 This Play and Walken’s Creepy Performance Deserve a Hand for Most Creepy
By Lauren Yarger
Christopher Walken is one creepy guy – and that’s as it should be in Martin McDonagh’s newest Broadway play, and his first set in the USA, A Behanding in Spokane.

Walken plays Carmichael, a psychopathic killer searching for his missing left hand which was chopped off when some hillbillies in Spokane held the 17-year-old youth down in the path of an on-coming train. Cruelly, they used the severed hand to wave goodbye to him and now, years later, Carmichael is still trying to regain what was rightfully his.

The search connects him with a couple of con artists, Toby (Anthony Mackie) and Marilyn (Zoe Kazan), who try to convince him that an Aboriginal hand they stole from a museum is the one he is seeking. The deal disjoints, however, and Carmichael holds the couple hostage, chains them to the radiator in his shabby hotel room (Scott, Pask, set design) and goes to their apartment where they claim to have left the real hand on top of a freezer.

The couple brings new meaning to the word stupid, with Marilyn continually derailing Toby’s attempts to make up stories that might cause Carmichael to let them go, like the “other-hand-on-top-of-the-freezer” tale. She’s oblivious to their danger because she’s ticked off that Carmichael used the “n” word, and she’s even more angry at her African-American boyfriend for not being offended by it. They argue a lot and Toby cries a lot while they make some ridiculous attempts to save themselves. They don’t think of using the phone to call for help, however, until after Toby takes a call from Carmichael’s mother.

Perhaps even more stupid than the hostages, if that is possible, is hotel clerk Mervyn (Sam Rockwell), who obsesses about monkeys and of being a hero one day, all while knowing Carmichael is up to no good. He refuses to help the hostages escape, though, and somehow sees himself as Carmichael's sidekick. The sudden realization that Carmichael is the smartest person in the room is very frightening.

If this all sounds like an unlikely plot for a play, it is, until we notice the scathingly witty comment on society that McDonagh has weaved through it. It’s really uncomfortable to laugh at some of the language and really macabre situations, but it is very funny, and true, if bizarre, and you can’t help yourself.

It’s a dark and creepy comedy, tightly directed by John Crowley and played to perfection by Walken, who seems to enjoy making the audience wince. Only he could pull off shooting someone, then deliver an unaffected “I love you” to his mother on the phone in the next beat.

A Behanding in Spokane plays at the Gerald Schoenfeld Theatre, 236 West 45th St., NYC through June 6. Discounted tickets are available for friends of Masterwork Productions by going to http://www.givenik.com/?code=Masterworks. Click on the show and make sure you have selected Masterwork Productions as the charity you are supporting.