Theater Review: All About Me with Michael Feinstein and Dame Edna 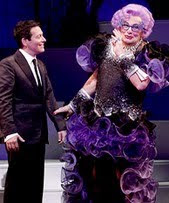 First, there is the clumsy script from Christopher Durang (with Humphries) which contrives to have the two personalities feuding over just who is the star of this show. It’s a corny nightclub act at best, hardly worthy of the $125+ Broadway ticket price. The real tragedy is that the ridiculous forced feud eats into time allowed (it's only 90 minutes long) for what we really want to see: Michael Feinstein and Dame Edna doing what they do best.

While Edna sings a couple of typically humorous songs like “The Dingo Ate My Baby” and pokes fun at a few audience members, the song selections for Feinstein are odd and we only get to enjoy a couple of the American songbook standards we’d like to hear (Rob Bowman is the music supervisor). Do we really need to hear him sing “A Lot of Living to Do” when the memories of its being sung on the same stage just a few months ago during the disastrous revival of Bye Bye Birdie still echo instead of, well, anything else by Gershwin, for example?

The script could use some updating as well: Edna pokes fun at Stephen Sondheim while failing to mention that the Henry Miller’s Theater, where she’s performing, soon will be named for him. Annoyingly, the Playbills are designed so that only one of the stars is featured, depending on which one you happen to receive.

If you can put aside the disappointments, however, All About Me still offers entertainment (either one of the stars on a stage equals entertainment, after all). There’s a nice-sounding band on stage (Bowman conducts), two muscled dancers (Gregory Butler and John Paul Mateo) backing up Edna and a stage manager (Francesca Russell) to referee the competition between the stars and who belts out a tune of her own. Oh, and there are sparkly outrageous gowns (for Edna, not Feinstein, possums) and of course, lots of gladiolas.

Christians might also like to know:
• Racy humor
• The show posts a Mature Advisory
• Reincarnation philosophy stated
Posted by LaurenYarger at 5:31 PM