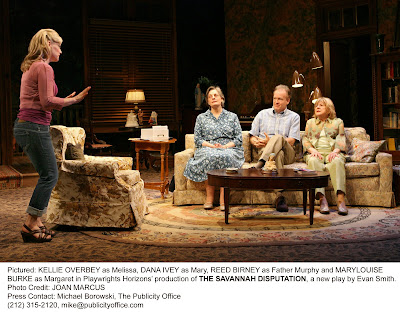 Apologetics Without Apologies
By Lauren Yarger
Good and evil lock horns in battle for immortal souls in The Savannah Disputation, running at Playwrights Horizons in New York, but who sports the horns of the lamb and who has the horns of Satan? Well, that’s what the battle is all about.

Melissa (Kellie Overbey), a Christian missionary thinks she has all of the answers and sets out on her quest to “convert” Catholics. She arrives on the doorstep of elderly Savannah, GA sisters Mary (Dana Ivey) and Margaret (Marylouise Burke) and the battle begins. Margaret, as sweet and simple as they come, invites Melissa in and reads some of her pamphlets raising questions about whether the Catholic Church is the one true church.

“Your whole church is founded on a grammatical error,” Melissa says, citing original Latin text from the bible and Margaret starts to question her faith. Mean and feisty Mary wants no part of Melissa and her teachings and throws her out making Melissa question her calling as a missionary. 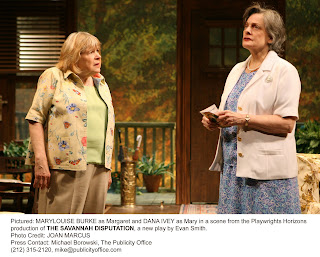 When Margaret defies her sister’s command not to see the evangelist again, Mary concocts her own plan. She invites her unsuspecting priest, Father Murphy (Reed Birney), over for dinner on the same night Margaret invites Melissa back for another talk.

Mary fills the priest in on her plan minutes before Melissa arrives. “We want you to crush her,” she says with glee.

Uncomfortable with Mary's manipulation, he keeps quiet while Melissa begins her anti-Catholic instruction, but soon Murphy’s identity is revealed and he and Melissa engage in a spirited battle of apologetics. Before the evening is over, Mary seeks excommunication from the church and starts tossing statues and other religious relics in the trash while Margaret, who riotously flees the room at each warning shot of battle, can’t find anyone who can answer her questions.

Evan Smith’s play is full of humor and allows the debate to rage without anyone seeming preachy. Weapons of information fly from both sides as each makes a case for having the only straight shot to heaven. The characters are interesting and real without becoming caricatures of what they represent. Mary is both ornery and vulnerable; Margaret is naïve, yet unwavering; Melissa is abrupt, but caring and Murphy is tolerant, yet convicted. And in a nice turn, Mary keeps deleting phone messages from her doctor’s office reminding her that her test results are back. The possibility of a life-threatening illness gives the debate about the need for eternal salvation increased meaning.

The performances, under the direction of Walter Bobbie, are top notch. Ivey is irrepressible as the mean-spirited Mary who tangles with nuns and doesn’t care if she offends anyone because, as she reminds us, she doesn’t have any friends any way. Burke is thoroughly engaging as the sweet and humble Margaret who brings to mind a favorite aunt, school teacher or someone else whose kindness has touched you. Her questions, it turns out, don’t really stem from disbelief, but from concern about whether Mary will end up in heaven or not. Overbey and Birney hold their own against and fuel the performances of the powerhouse spinsters.

It’s a near heavenly production, enhanced by the technical elements (scenic design John Lee Beatty; costumes David C. Woolard; lighting Kenneth Possner and sound, Tony Meola). The apologetics are without apology and are the impetus for greater understanding of why you believe what you believe.

Christians might also like to know:• Good information on tenets of the Catholic faith and on original bible texts