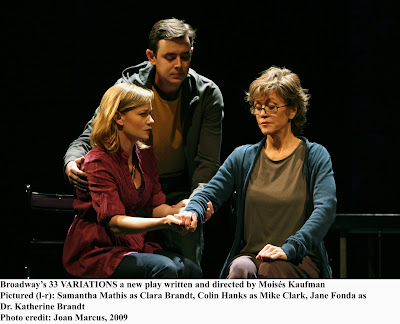 A Harmony of Music, Life, Purpose

By Lauren Yarger
Jane Fonda’s return to the stage, beautiful music, layered dialogue from playwright Moises Kaufman, the past and the present all join to strike a harmonic chord in 33 Variations playing at Broadway’s Eugene O’Neill Theater.

Fonda plays musicologist Katherine Brandt, diagnosed with a fatal degenerative disease and obsessed with using the time she has left to discover why Beethoven (Zach Grenier) wrote 33 variations of an insignificant waltz composed by his publisher, Anton Diabelli (Don Amendolia). She travels to Bonn, Germany where the original compositions are stored (in a wonderfully engineered set from Derek McLane which features a sumptuous music library with screens of the compositions (projection design Jeff Sugg) and stack upon stack of boxes, which when lighted in greens and bronze hues by David Lander, take on a treasure-box-like glow and draw in the color scheme from the theater itself, pulling the audience into the action on the stage.

The library’s caretaker, Gertrude Ladenburger (Susan Kellerman), is reluctant at first to entrust the works to Katherine, but their mutual admiration for Beethoven and Gertrude’s history of caring for an aunt who has the same illness soon forge a strong bond between the women. Kellerman’s nifty comedic timing and delivery of lines in a guttural German accent make for some lighter moments of relief in the play. Meanwhile, Katherine’s daughter Clara (Samantha Mathis) and her boyfriend Mike (Colin Hanks), who was Katherine’s nurse at home, follow her to Bonn. Mother and daughter try to find a way to breach the walls of an uneasy relationship. Katherine is critical of her daughter’s choices of boyfriends or career. The embodiment of variation, Clara is a “costume designer who excels at changing careers,” a trait perhaps emphasized by the show’s actual costume designer Janice Pytel since Clara’s clothes hardly reflect the taste one expect from someone with an artistic flair. Clara doesn’t know how to reach out, nicely made visible by Kaufman, who also directs, by physical distance and reluctance of the characters to touch.

Meanwhile, back in the 1800s, Beethoven frustrates his assistant Anton Schindler (Erik Steele) and Diabelli by continuing to write variations on the same waltz. It interferes with his work on the Ninth Symphony and Beethoven is fighting the clock any way as his hearing and health deteriorate. Past and present take place next to and around each other, sometimes transcending barriers. At the end of the first act, both Katherine and Beethoven join their voices in saying they need “more time to finish the work.” In a funny bit, Gertrude comes and takes a conversation book she and Katherine need for research out of the hands of Schindler as he is writing in it. In one of the most moving and beautiful moments on stage, Katherine, being X-rayed, and silhouetted against the blinding flash of the lights, leans back on Beethoven for support.

All of this becomes harmony with an intermittent underscore of the original waltz and some of the variations played by music director Diane Walsh, down stage right on a piano. As Katherine deteriorates (Fonda plays the physical limitations well, but looks pretty darn healthy), she finds new meaning in Beethoven’s work. Maybe he wasn’t just trying to mock the inferior composition, or trying to change it. Maybe he was transforming it into its better self and appreciating it for what it had to offer.

The ending of the story, complete with a minuet (choreography by Daniel Pelzig), is one of the most satisfying conclusions to a play I’ve ever seen.

Christians might also like to know:
• Sex Outside of Marriage
• Assisted Suicide discussion
Posted by LaurenYarger at 4:17 PM