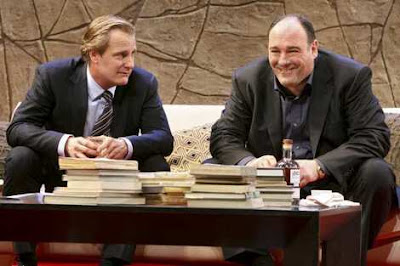 Bad Manners, but Staged in Oh, So Good a Manner

By Lauren Yarger
Tribal drums open the curtain at the beginning of God of Carnage on Broadway and it’s soon apparent that war indeed is about to erupt as two sets of parents meet to discuss a fight between their schoolboys.

Veronica and Michael (Marcia Gay Harden and James Gandolfini) whose boy had some teeth knocked out in the incident, invite the other boy’s parents, Annette and Alan (Hope Davis and Jeff Daniels) over to their home. The meeting begins with a forced politeness as the four attempt to find mutually agreeable wording to describe the incident for insurance claims (Annette and Alan object to their boy being described as “armed with a stick”). Things quickly go from bad to worse.

Attorney Alan clearly is here against his will and interrupts discussions by taking frequent cell phone calls about a possibly harmful drug produced by a company he represents. His lack of respect for hardware salesman Michael and lack of interest in the discussion, as well as in his son, it would seem, erodes the congenial atmosphere Michael and his wife have tried to create by serving a special dessert and decorating with fresh tulips.

Veronica wants to know how Annette and Alan will punish their instigator son and the conversation soon turns ugly, aided by the tongue-loosening effects of some aged rum (the first thing Alan seems genuinely interested in). All manners go out the window and the carnage abounds, including diminutive Harden’s hilarious flying-leap attack of bulky Gandolfini, one of the best puking scenes you’ll ever see on stage, a constant running joke about the plight of a hamster, the drowning of the cell phone and a violent shredding of the tulips. All this takes place in a civilized living room surrounded by towering blood-red walls from set and costume designer Mark Thompson.

While playwright Yasmina Reza’s script (translated by Christopher Hampton) might have a few holes (there’s no reason evident for why Annette and Alan would agree to the meeting in the first place or stay once it gets unwieldy among other nit picks), it plugs them with non-stop laughs throughout the show. We can’t help but see ourselves a little in the characters, even if we never would be brave enough to say or do what we witness.

Director Matthew Warchus blends four terrific performances and scores some extra points for casting Gandolfini, whose facial expression, especially during the puking scene, are priceless. Naturally funny lines about having belonged to a gang who would beat people up for him, for example, are enhanced when delivered by the former head of HBO TV’s Soprano Mafia family.

Daniels is slickly sublime, Harden is deliciously frustrated and Davis is really funny as the peacekeeper turned violent.

Christians might also like to know:
• Language
• God’s name taken in vain
Posted by LaurenYarger at 8:14 PM