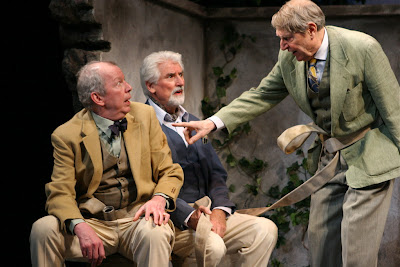 By Lauren Yarger
Three WWI veterans battle to pull off one last offensive, ostensibly to take a hill and a group of poplar tress they can see in the distance, but in truth, the siege is one last assault against old age in Keen Company’s production of Heroes at the Clurman Theatre, Off Broadway.

Henri (John Cullum), Gustave (Ron Holgate) and Philippe (Jonathan Hogan) fall into a convenient camaraderie as residents of a veterans' home in 1959 France. They visit each day on “their” terrace, created by scenic designer Beowolf Boritt.

Gustave, pompous and a little miffed that the others don’t recognize his superior pedigree, pretends he is a fearless leader, but in truth, has been afraid to venture past the front gate of the grounds. He finds companionship in a stone statue of dog on the terrace. Philippe suffers from frequent fainting spells, the result of shrapnel remnants. He thinks he sees the dog moving and is convinced that the nun in charge of the retirement home is trying to kill him. Henri tries to keep the peace while enjoying his “daily constitutional,” a walk to catch a glimpse of the head of a young girls’ school nearby. He’s too shy to skrike up a conversation with her, though.

Spurred into action by the suicide of the home’s oldest resident and by the rumor that their terrace may soon be invaded by other residents, Gustave tries to incite his brothers in war to join him in a daring escape to Indochina. Henri suggests a picnic on the grounds as a more practical alternative. The men plan a defensive including rigging the terrace with barbed wire and machine guns. When that doesn’t seem practical, they finally agree to make a run for the stand of poplars on top a hill where they dream of standing free “where the wind blows.”

The play, written by Gerald Sibleyras and translated by Tom Stoppard, is full of good humor. A running joke about the dog remains funny throughout and builds to an unexpected punch line. A scene where the four tie themselves together in preparation for their hike is endearing. The men are likable and we feel like we want to pull up a garden chair and join them for an afternoon on the terrace.

The character development is deftly handled by the playwright. Interestingly, we don’t know a whole lot about these men. They all dress in three-piece suits, differing only in their selection of tie (Theresa Squire, costumes) and Henri’s display of a few medals. We learn Philippe has a sister and an obnoxious brother-in-law, with whom Gustave corresponds in Philippe’s stead. He wanted to be a concert pianist, but passing out frequently “was a handicap.” Gustave’s wife left him for a pharmacist and Henri wanted to be a picture framer once.

The lack of backstory is significant, because we come to understand that it really doesn’t matter what the details of their lives were, because the point is, that for the most part, the best part of their lives is over and they all now share an existence defined by old age. Gustave doesn’t attend a party for one of the residents and finds that no one missed him. Philippe has a fainting spell and falls into the open grave at a funeral, a metaphor of what they all fear: being gone and not missed.

It’s a touching story delivered by three skilled actors with years of stage experience amongst them. As they are directed through the emotions of complacency, hope, fear and resilience by Carl Forsman, we find ourselves really routing for them to make it up the hill.