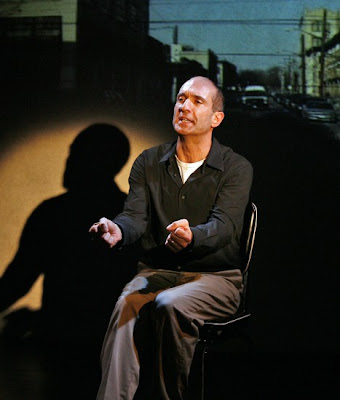 By Lauren Yarger
Take a little family, add some humor, stir in 20 characters, flavor with a little dysfunction and you’ve got the recipe for Blood Type: Ragu, Frank Ingrasciotta’s one-man reflection on growing up in a Sicilian immigrant family trying to make its way in America.

Skillfully directed by Ted Sod, Ingrasciotta gives distinct personalities to the multitude of characters, including his overbearing father who works long hours to put food on the table (eating being an important “liturgy” in the home), his worrying, superstitious seamstress mother, a bunch of unflatteringly nicknamed neighbors, a host of Sicilian relatives and his non-Italian stepmother, who comically asks whether he’d like some more sorelli (mozzarella).

Bubbling just under the surface of the brew is a deeper story: that of Ingrasciotta’s coming to grips with and forgiveness of his father’s shortcomings. It’s this more poignant ingredient and Ingrasciotta’s vulnerability in sharing the not-so-comical memories of his family that provide a base for the show and keep it from deteriorating into a saucy ethnic parody.

Through clever staging (John McDermott) that incorporates projections of video and drawings (designed by Joshua Higgason), Ingrasciotta at times appears to walk through the rooms of his childhood home or dance in the fields of Sicily.

Written by the actor and based on his own experiences growing up in New York, the script is full of good humor as well as pathos and invites the audience in like guests encouraged to sit at the family table and manga! The script would benefit, however, with the chopping out of one lengthy and graphic description of Ingrasciotta’s first experience of manhood with a Las Vegas prostitute. It plays like an ingredient added to spice up the sauce, but which, in its deviation from the locales and flavor of the rest of the show, instead leaves a bad taste in the mouth.