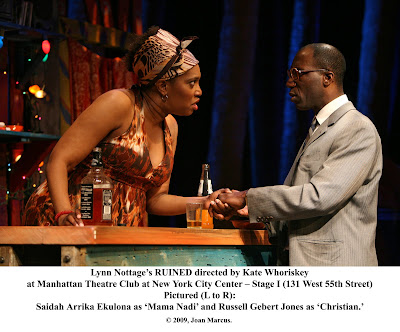 By Lauren Yarger
Ruined, Lynn Nottage’s tale of war and rape and the triumph of the human spirit over those atrocities is a rich, wonderfully written play that puts faces we care about on the tragedy and transports an off-Broadway audience at New York City Center to Africa.

Set in a small mining town in the Democratic Republic of Congo, Ruined revolves around the lives and events at a bar/brothel in the Ituri rainforest (effectively rendered by scenic, lighting and costume design from Derek McLane, Peter Kaczorowski and Paul Tazewell). Salima (Quincy Tyler Bernstine) and Sophie (Condola Rashad) are brought to the establishment’s formidable owner Mama Nadi (Saidah Arrika Ekulona) by Sophie’s profiteering uncle Christian (Russell G. Jones). The girls have been turned out in shame by their families after being raped by soldiers. Sophie’s attack, including the use of a bayonet, was so brutal, she was “ruined” and she walks with a limp, her legs slightly apart.

Salima, who becomes pregnant, and another of Mama Nadi’s girls, Josephine (Cherise Boothe), who was the daughter of a chief, are forced to entertain the men who frequent the bar while Sophie, unable, earns her keep by keeping the books and singing (original songs by Dominic Kaza accompanied on guitar and drum with lyrics by Nottage and music and sound direction by Rob Milburn and Michael Bodeen).

Soldiers from both sides of the civil war seek out the pleasures of the establishment, and with both leaders, Jerome Kisembe (Chris Chalk) and Cmdr. Osembenga (Kevin Mambo) showing their evil sides, it’s hard to tell who the enemy is. Mama, whom theatergoers will liken to Bertolt Brecht's Mother Courage, won’t take sides. She saw her family lose everything in the conflict and she is determined to hang on to her own land, which represents independence, at all costs.

“Mama’s doors are open to everyone, so trouble doesn’t settle here,” she reasons. She hides away a raw diamond which Mr. Harari (Tom Mardirosian), an Englishman connected with the diamond mines and one of Josephine’s regulars, tells her is quite valuable. Representing the dreams of freedom and a better life, it is her insurance policy.

“No one is going to show up at the door and take my life away again,” Mama resolves.

The price of holding on to her land might include losing a chance for happiness with Christian, however. They enjoy friendship full of banter and some laughs when he stops by to deliver hard-to-obtain supplies like chocolate, cigarettes and condoms, but she rebuffs his repeated poetic attempts to declare his deeper feelings. She demands that the soldiers surrender their bullets at the door and leave the conflict outside as she tries to keep her dealings with the two sides secret from each other. The escalating conflict and the murder of a nearby missionary suggest that the juggling act might not protect the bar much longer.

“Eventually you must fly your colors; take a side,” Harari tells Mama. 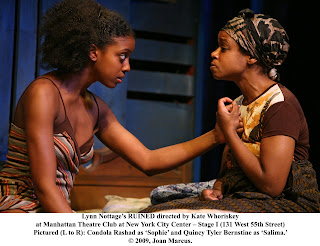 Salima’s husband, now a soldier, searches for her, but she refuses to see him when he finds her. Bernstine’s dynamic portrayal as Salima explains that decision is one of the most moving scenes you’ll see on a New York stage this year. She recounts her tragedy which started out a beautiful day like any other with a clear sky and garden tomatoes to be picked. There is not a dry eye in the house when she finishes and exclaims, “Oh, please God, give me back that morning.”

She blames herself for not seeing or hearing the soldiers until they were upon her. It’s a metaphor for Nadi and all the people of the country and the world who stand by silently and ignore what’s going on around them. They are like a parrot left at the bar by the last member of a tribe. The bird is the sole voice for the tribe’s history and when it is silent, the tribe will exist no longer.

Finally, it appears Sophie might have a chance to escape. The storytelling skills of director Kate Whoriskey and the playwright have so fully engaged the audience at this point that theatergoers lean forward on the edge of their theater seats in a united effort to will the girl onto a waiting truck. The portrayals by all of the actors, including the ensemble, are riveting. It’s powerful theater leading to an ending with a testament to hope and to the human spirit’s ability to triumph.

The Manhattan Theatre Club offers Ruined as a co-production with Chicago’s Goodman Theatre. It has been extended through Sept. 6 at NY City Center, 131 West 55th St, NY. For tickets visit http://www.nycitycenter.org/.

Posted by LaurenYarger at 1:31 PM