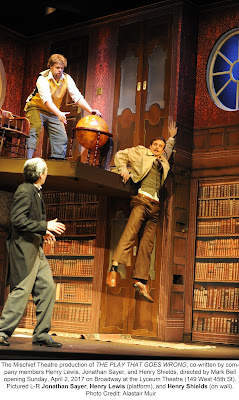 The Play That Goes Wrong
By Henry Lewis, Jonathan Sayer and Henry Shields
Directed by Mark Bell
Mischief Theatre
at the Lyceum Theatre

By Lauren Yarger
A transfer of the Olivier Award winning comedy The Play That Goes Wrong is some of the most fun I have had in a theater this season -- or any.

The mishaps of a theater group trying to put on "The Murder at Haversham Manor" are a hoot, whether you are a theater buff or not. In the tradition of the play-within-a play like Noises Off, The Play That Goes Wrong certainly does -- or actually "The Murder at Haversham Manor" goes horribly wrong before it even starts, to the horror of its cast and to the delight of the audience.  It's a nightmare for "Cornley Polytechnic Drama Society" Director Chris Bean (Henry Shields) who valiantly works with his fellow thespians to make sure that the show must go on.

He plays Inspector Carter, arriving on the scene (designed in complicated farce detail by Nigel Hook) to investigate the murder of Charles Haversham (played by Jonathan Harris, who is played by Greg Tannahill), who has been murdered on the eve of his engagement party. He very amusingly and obviously is not all that dead through some of the action, however.

If that sounds complicated, it is, but the zany characters are all explained in the program-within-the-program along with hilarious bios for the "Haversham" cast and a letter about the production from Bean.

Getting in the way of the murder-mystery production are missed sound cues, malfunctioning props, a set that collapses, missed lines of dialogue, and unconscious performers amidst the chaos. Some of the gags bring astonished gasps from the audience, which laughs out loud pretty much non-stop during the two hour play with an intermission. Director Mark Bell expertly keeps attention riveted (and diverted when necessary) and the ensemble displays keen comic timing, both with dialogue and physical comedy. A highlight is Hearn as the amateur actor who reacts with joy every time, usually mistakenly, he thinks applause is for him. It's a gag that doesn't get old no matter how many times he does it.

The production has transferred from the West End where it won the 2015 Olivier Award for Best New Comedy. The "whodunit" pales in comparison to the "what's-coming-next" in this zany, fun production.

The Play That Goes Wrong messes up and is every theater-maker's worst nightmare (in such a delightful way) at the Lyceum Theatre, 149 West 45th St., NYC. Performances are Tuesday, Wednesday, Thursday at 7 pm; Friday and Saturday at 8 pm; Saturday at 2 pm; Sunday at 3 pm. Tickets: $30-$139:  broadwaygoeswrong.com

Posted by LaurenYarger at 3:51 PM