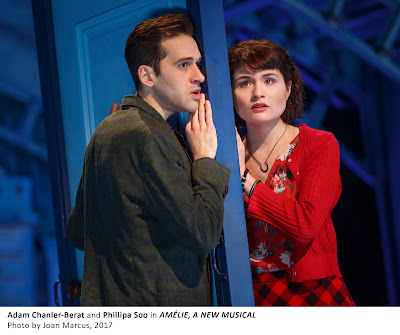 By Lauren Yarger
A whimsical tale about a shy, imaginative French woman helping people in Paris is the latest attempt to make a film-to-stage jump, but even with the popular and talented Phillipa Soo in the title role, Amélie lacks "je ne sais quoi" to capture the essence of the film or our interest.

Actually, I do know what it is, because, after all, that is my job. First, there is a surprisingly poorly constructed book by Craig Lucas (An American in Paris; The Light in the Piazza). Lucas spends too many of the 100 minutes in this show creating some back story for us about Amélie and how she ends up being the shy woman who withdraws from society and lives in her own imagination.

A young Amélie (a miscast Savvy Crawford who is not quite ready for her Broadway debut) has undemonstrative parents, Raphael and Amandine (Manoel Felciano and Alison Cimmet), and when her mother dies tragically and her father withdraws further, the young girl escapes into her imagination, depicted Peter Nigrini's projections which fill out the unimaginative sets by David Zinn, who also designs the costumes. A bunch of doors and frilly wardrobes are supposed remind us we are in France.....

Finally Amélie grows up and becomes a waitress in a Montmartre cafe. When she discovers a box of toy treasures in a hidden space in her apartment, she manages to return it to the original owner and feels a sense of purpose in her otherwise drab life. She will be an anonymous do-gooder, she decides, and be thought of like Princess Diana. She comes out of her shell, sending her father's treasured garden gnome on a world-wide tour in the hope of drawing him out as well.

She develops a relationship with her neighbor, reclusive painter Raymond Dufayel (an endearing Tony Sheldon), and in trying to solve a mystery involving discarded, ripped images from photo booths at train stations, finds her own romance with a pornography store clerk named Nino (Adam Chandler-Berat).

She also helps complete a love letter from a long-dead husband and bolsters the ego of a poet, but doesn't do my favorite prank from the movie by coming to the assistance of a mentally challenged boy being bullied by a shop owner. Now, I know, I shouldn't hold that against Lucas, but the scenario is set up so that fans of the movie anticipate it. We see the abuse, but then it is just forgotten and not resolved. It is very disappointing and there really is no reason to include it in the book if Amelie isn’t going to come to the rescue.

If allthis plot sounds a bit strange, it is, but it fails to charm like the movie. Attempts to bring absurdist qualities of the film to the stage, like having Amélie's gold fish and the garden gnome come to life (thanks to puppetry designed by Amanda Villalobos) -- with the latter dancing to Sam Pinlketon's choreography to a tune called "There's No Place Like Gnome" -- fail and are “incroyable” -- in the very "mal" sense of the word.

The score by Daniel Messé, pianist for New York band Hem, is pleasant, but not memorable. Lyrics by Messé and Nathan Tysen (Tuck Everlasting) might force the title of this musical to be switched to Ennui, rather than Amélie.

This is from "Stay Right Here":

"I take a step to get out, but my feet forget how. Now it’s me just me against a door. This isn’t what I thought, although I think I want some more, but not right now. Now I need to go."

And this, from a number called "Where Do We Go from Here":

"Where do we go from here now that we are sitting side by side, after all there’s more to life than we can see.  Will there be troubles? I don’t know. Will there be sweet things? I hope so. Will there be time to keep on dreaming once this dream is over?

Soo is charming and it is always a pleasure to hear her lovely voice, but she doesn't get to do much with it here. She doesn't try to replicate the character created by Audrey Tautou on the screen, but MacKinnon doesn't guide her in making Amélie truly her own, either. The production has the feel of an early run through. Interesting ideas and possibilities, but they need editing and lots work.

Posted by LaurenYarger at 6:44 PM