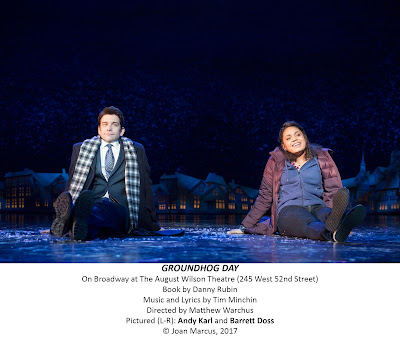 By Lauren Yarger
If you're a fan of the movie, you'll enjoy the screen-to-stage version of the comedy Groundhog Day starring Andy Karl as a weatherman who finds himself trapped in a day that won't end.

Karl, who injured his knee just before the show's opening, valiantly continued on with a "show-must-go-on" attitude and won the hearts of the audience. Awards nominations surely will follow.

Following his acclaimed performance in the London production of the Tim Minchin/Danny Rubin musical, Karl plays Phil Connors (played by Bill Murray in the film) unenthusiastically covering the antics of Punxsutawney Phil, the Pennsylvania groundhog who once a year predicts whether there will be six more weeks of winter by whether or not he sees his shadow.  The small-town experience doesn't interest the human Phil much, until he realizes the day keeps repeating itself.

He finds himself in the same situations and the same conversations with the townsfolk and his associate producer, Rita Hanson (Barrett Doss). When he realizes he isn't dreaming, he tries to end it all to stop the futility of his existence, but finds that no matter what he does, the alarm clock wakes him at exactly the same time for the exact same day.

Phil starts to wonder whether he can use his knowledge of what is to happen to make a difference and change outcomes for some of the town's residents. When his heart changes, so does the relationship between him and Rita.

The score is pleasing and the lyrics are clever as well as humorous. Matthew Warchus (who reunites with Minchin and Rubin from Matilda) expertly directs the action on the fabulous set designed by Rob Howell. The storytelling is set to movement by Choreographer Peter Darling and Co-Choreographer Ellen Kane. In fact, everything blends together so well, a cameo appearance by Karl's knee brace even seems like it could be part of the original script.

The relationship between Phil and Rita could use some development. Rita doesn't seem to sure of herself or what she wants, but Nancy (Rebecca Faulkenberry), who is no more than window dressing to Phil and the guys of Small Town USA gets an unexpected solo about why she is the way she is and how women are taught to focus on their looks) called "Playing Nancy."