Broadway Theater Review: Come From Away 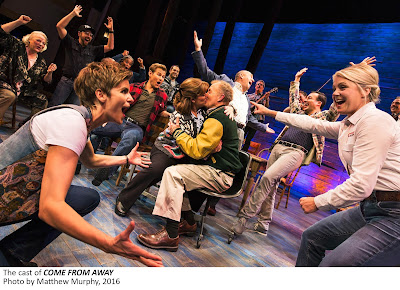 By Lauren Yarger
The "plane people" might have Come from Away, but the uplifting message -- my prediction so far for the Tony award for Best Musical -- comes from within.

The unlikely musical born out of the despair after the September 11 attacks leaves us feeling good. Proof that humanity can be kind leaves us wanting to stand and give a rousing rendition of "O Canada" while waving an American flag.

The story is based in reality. On Sept. 11, 2001, after the attacks on the World Trade Center and the Pentagon, US air space was shut down meaning that planes on route had to be diverted to other locations. Some 38 planes and 6,579 passengers were forced to land in the small town of Gander, Newfoundland, where the islanders on "the Rock" threw themselves into the task of welcoming their unexpected guests.

Folks on the plane hadn't even realized what was going on since information had been difficult to come by and when they land, they are horrified to discover the extent of the devastation. They begin efforts to let their loved ones know they are all right -- and where they are -- and to track down the fate of loved ones in the states. They also discover they won't be going home any time soon.

The small population of Gander more than doubles overnight and the simple, plain townsfolk put aside everything else, including a local school-bus strike, to make the visitors as comfortable and welcome as possible. We get a sense of what a monumental task this was when it is reported that more than 7,000 meals are prepared in one night.

Director Christopher Ashley tells the action with the use of minimal props on Beowulf Boritt's simple set with an emphasis on the characters and their relationships. Some of the characters are quite interesting, especially Beverley (Colella), a female pilot of one of the planes, who shows admirable leadership skills, and who gets a nice solo "Me and the Sky" describing her path to the cockpit. Also intriguing are Hannah (Smith) who searches for information on what has happened to her New York firefighter son and Beulah (Van Wieren), who offers her support and friendship. Note to playwrights: some of the most interesting and strong female characters are found in real life.

Among the many story lines, Diane (Wheatley) and Nick (MacDougall) find romance - some hope coming from an otherwise terrible day. It's also wonderful to see Chad Kimball (Memphis) back on stage as one half of a gay couple not sure whether their relationship will be embraced in Gander, though we miss getting to see him sing a solo. Instead, he doesn't draw attention and gives a solid ensemble performance.

What's really inspiring about Come from Way is that these are real people and we feel we come to know them personally. At the depiction of their poignant 10-year reunion, we ask ourselves, "Can it really been 10 years?"

In reality, it has been more than 15 since that September morning, but the emotions we experience during this show make us feel that all of this happened just a few days ago because we are so in tune with these characters and their experiences. At a show beginning the Broadway run, the real-life Gander people came on stage with the actors who portray them. There couldn't have been a dry eye in the house.

The musical comes at a time when our nation is in the throes of political unrest making us feel everyone is an enemy. There are a few tense moments as Muslim plane passengers inspire fear. There also are wonderful moments of faith as Christians, Jews, Muslims and Hindis worship together and when a bible verse (Philippians 4:6) transcends human language and speaks to the heart.

What a treat to experience a show where hatred is defeated by the simple offerings of good neighbors and caring people. I so wanted to see the Canadian and American flags displayed at the end of this show, that their absence is one of the few complaints I have. Others are one member of the ensemble who needs to take some acting lessons and, like Kimball, learn how to keep from calling attention to himself in an ensemble performance. For me, the music was way too loud, but this might have been due to my up-front seat.

Otherwise it is very tight, inspiring and worth seeing and could run away with the Tony for Best Musical this year.

Posted by LaurenYarger at 1:03 PM