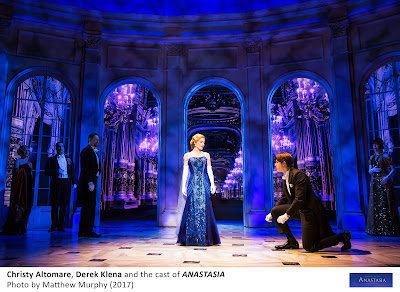 By Lauren Yarger
Tween girls who want something to watch in between performances of Wicked, look no further. The big-set, big costume musical Anastasia, inspired by the 20th Century Fox films (1997 animated starring the voice of Meg Ryan and 1956 movie starring Ingrid Bergman) is just what you are looking for.

Christy Altomare, who has received Outer Critics and Drama Desk award nominations in her Broadway debut, stars as Anya, a young girl who just might really be Anastasia, the daughter of Tsar Nicholas II (Constantine Germanacos) and Tsarina Alexandra (Lauren Blackman) who were murdered when Revolution gripped Russia in 1907.

The young girl, who has little memory, but whose dreams are haunted, is recruited by Dmityr (Derek Klena) and his companion, Vlad (John Bolton) to school her in the ways of royalty and pass her off as Duchess Anastasia. There are some obstacles to this plan in Terrence McNally's book:
The sets designed bu Alexander Dodge are lavish and large. Aaron Rhyne's Projection Design helps take us from St. Peterburgh to Paris and the train ride is so realistic you might just get car sick.  The biggest star of this show, however, is Linda Cho. Her costumes are numerous and breathtaking and range from street clothes to grand ballgowns and formal attire for the men. Anya makes an entrance in an exquisite blue gown trimmed with silver that is sartorial perfection. It brings screams, gasps and applause form an audience I didn't think could get much mire enthusiastic. Every tune in the Stephen Flaherty score is greeted by enthusiastic applause, especially Altomare's belt of the first-act finale"Journey to the Past" ( think "Defying Gravity" and you'll capture the feel of the moment....).

While the show, directed by Darko Tresnjak (who is reunited with some of his team from the Tony-Award winner A Gentleman's Guide to Love and Murder, including Chorepgrapher Peggy Hickey), is grand to look at, the story is predictable and has little tension (including no discernable chemistry between Anya and Dmitry). What tension it has is a bit dark, with Anya haunted by ghosts from her past and a scene depicting the murder of her family (a bit much for little ones for whom fantasy shows are needed on Broadway) and Gleb suddenly decides killing Anastasia isn't all that important after all...... Some changes have been made from the premiere at Hartford Stage (it won the CT Critics Circle award for Best Musical last year), but it still could use some tweaks.

Besides the Academy-Award nominated "Journey to the Past," and "Once Upon a December" (the music box song), both from the animated film, the rest of the score from the team that brought us Ragtime isn't all that memorable. A humorous song called "“The Countess and the Common Man,” where Vlad and Lily try to ignite their youthful passion in middle-aged bodies, is amusing, however.

I kept wanting something more all the way through this story, but apparently I was alone based on the enthusiastic audience response. so I predict a nice long run for this musical, which has been nominated for a bunch of Outer Critics and Drama Desk awards. Cho is nominated for a Tony for her costume designs and Peil is nominated as Featured Actress, but the musical was shut out in other Tony categories.

FAMILY-FRIENDLY FACTORS:
-- God's name taken in vain
-- I would recommend for 10 and up

Posted by LaurenYarger at 4:48 PM