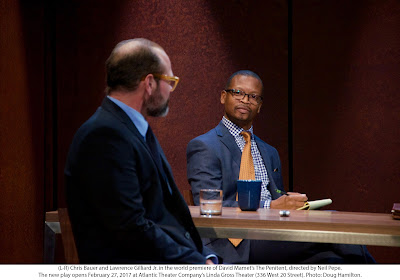 By Lauren Yarger
What Is It All About?
The world premiere of a new play from David Mamet with hardly an F bomb to be found. It's an interesting study on just how far a person is (and should be) willing to go to stand up for what is right -- or to defame someone else just to get what you want. The themes seem particularly vital in the midst of current culture where false news can drive an agenda and where not being on the perceived "right side of an issue' can result in a person's being targeted with hatred and loss of livelihood.

Charles (Chris Bauer of "True Blood"" fame) is a renowned psychiatrist who refuses to testify on behalf of a client. The client claims homophobia is the reason and goes public with his allegation citing a paper Charles once wrote calling homosexuality an aberration. Charles claims his decision not to support the youth with his testimony is instead because of the heinous crime committed by the boy -- the shooting of 10 people. The "aberration" remarks are an incorrect reporting of what Charles actually wrote in the paper, but that doesn't seem to matter.

The press focuses on Charles' character, rather than on the crime and soon his marriage and career are threatened. He seeks advice from his colleague, Richard (Jordan Lage, who appeared in Mamet's Pulizer Prize-winning play Glengary Glen Ross on Broadway). He understands Charles' ethical objections to releasing any records of his sessions with the boy -- even if they will help exonerate him.

His wife, Kath (a miscast Rebecca Pidgeon), doesn't appreciate having her life turned upside down. The stress becomes too much with more devastating effects on her than even her husband who is the target of public hatred experiences. Joining in the pressure to just give in and testify is Charles' attorney (Lawrence Gillard, Jr. from "The Walking Dead"). He remains opposed, especially in light of the his recent religious awakening. He isn't quite sure exactly what he believes about God or his Word in the bible, but he feels that testifying on behalf of the boy would be wrong morally.

What Are the Highlights?
The themes are contemporary and thought-provoking. What is the price of being forced to commit an act one feels is immoral? The interaction between Charles and his attorney in the second act is the most engaging.

What Are the Lowlights?
The play can be unclear at times about who some of these folks are. I took me a while to verify in my mind that Kath was Charles' wife and for a while, I thought Richard was his attorney and a prosecutor before realizing he was a colleague.  It is two acts and does not need to be -- an 80-minute, no-intermission format would better serve it. So would some edits. We wonder where Charles' attorney is through most of the first act. Pigeon ("The Unit") seems to have trouble looking or sounding natural in the role. Pepe has her taking walks away from Charles and talking into space rather than directly to him which points out the distance between them, but unfortunately also contributes to her not fitting. The sharp, quick banter that is Mamet's trademark doesn't fall naturally off her tongue.