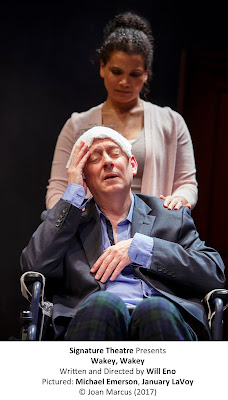 By Lauren Yarger
What's It All About?
A man named Guy (Michael Emerson), who really is "every guy," is facing his own mortality. When we first meet Guy, he is in his PJs on the floor, when he gets a "wakey, wakey" call: he apparently has been given news that he is living his last days on earth. A calendar on the wall of Christine Jones' enigmatic set shows days being crossed off, if a morbid sort of countdown (cardboard boxes are strewn about the set).

"Is it now," Guy asks several times throughout the 75-minute presentation.

In a flash (Nevin Steinberg, sound design and David Lander, lighting design), Guy is in a wheelchair, his condition obviously worse. He begins a monologue that is mostly stream of consciousness, speaking to the audience, though we're not quite sure why we are sitting in his room at what appears to be an end-of-life care facility, where he is helped eventually by a kind person named Lisa (January Lavoy).

The script contains some humor as well as some soul searching and thought provoking points:
What Are the Highlights?
Eno is a witty writer. Emerson (“Person of Interest,” “Lost”) conveys the humor as well as melancholy, giving us a portrait of a man trying to press up on the importance of what he has realized in the face of death and amidst frightening symptoms and the loss of control over his body.

Eno fans appeared to be in attendance laughing boisterously as lines that didn't seem all that funny.

What Are the Lowlights?
Some of the ramblings are vague and hard to follow. Even at only 75  minutes, I felt my mind wander. The woman next to me fell into a deep sleep.

FAMILY-FRIENDLY FACTORS:
-- No content notes
Posted by LaurenYarger at 11:13 AM