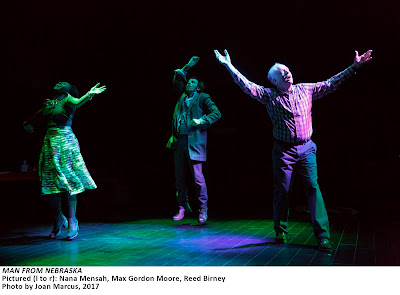 By Lauren Yarger
What happens when one day you realize that you no longer believe what you believe? That's the question poignantly explored by Pulitzer-Prize winning playwright Tracy Letts in Man From Nebraska getting an extended Off-Broadway run at Second Stage Theatre

For Ken Carpenter (the always-excellent Reed Birney), suddenly the stars are out of alignment and he isn't sure what he wants out of life. After all, he can't complain. He and his devoted wife, Nancy (the also always-excellent Annette O'Toole) have settled into the routine of comfortable life. They seem in sync as they go to church, visit Ken's mother, Cammie (Kathleen Pierce), in the nursing home, eat a silent meal together and finish off the day watching some bad TV.

They go through the motions of a normal life and Director David Cromer is the star here, allowing the drama to take its time to reveal the monotony of the couple's routine by not falling into the temptation to speed up the action. The result is that through an extended silence, or the subtle way Ken instinctively hands Nancy the napkin she needs, we get a sense of two that have become one, even if that one is fairly boring.

But one night, in what is probably the best depiction of a crisis of faith on stage (and one of the finest moments of acting you will ever see), Ken breaks down and confesses to Nancy that he doesn't believe in God any more. He is full of sorrow and despair and doesn't think God hears his prayers. He thinks people are not rewarded for what they do right and punished for what they do wrong, he sobs. Maybe we're all just accidental science and when we die, we're done.

He tries to talk with his daughter, Ashley (Annika Boras), with whom he works, but with whom he doesn't have a real friendship, but doesn't get anywhere. His other daughter is away at school and apparently not interested in interrupting her studies for a master's degree to deal with family matters. Nancy wants to help her husband, but doesn't know how, so she reaches out to their pastor, Rev. Todd (William Ragsdale). The understanding pastor doesn't seem phased, however, saying it just sounds like a bunch of questions have come up that Ken thought he had already answered. He suggests Ken take a vacation, get out of Lincoln, and spend some time by himself.

Ken heads to London, the only other place he has ever been (he had been stationed there while in the service) and strikes up an unlikely friendship with hotel barkeep Tamyra (Nana Mensah) and her flatmate (and comic relief character) Harry Brown (Max Gordon Moore). Soon, Ken isn't taking calls from home and is finding new ways to express himself through sculpture and a fling with the very willing and kinky Pat Monday (Heidi Armbruster).

Meanwhile, Nancy is left on her own to deal with Cammie, life in Lincoln and with the romantic attentions of Rev. Todd's father, Bud (Tom Bloom). The skies of Nebraska hang over all Ken experiences and finally call him home (thanks to Set Designer Takeshi Kata and Lighting Designer Keith Parham). Original music and Sound Design by Daniel Kluger adds to the mood.

Letts' script is sensitive and probing. These are real people with real issues tinged with messages about acceptance, friendship, forgiveness and what is real in life. The sadder elements of the story are balanced with humor, including some laugh-out-loud moments. The tightly written script runs a perfect two hours with an intermission. My only criticism is an obscure reference to Ken's not understanding the stars that doesn't seem to fit with the rest of his quandary about faith (but it does lend itself to a nice special effect).