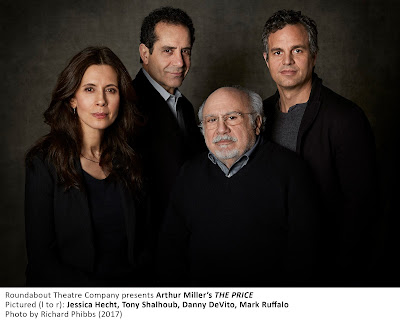 By Lauren Yarger
Talk about a dream cast! Tony Shalhoub, Jessica Hecht, Danny DeVito, along with Mark Ruffalo, show what character acting is all about in a limited Broadway run of Arthur Miller's The Price presented by Roundabout and directed by Steppenwolf Theatre Company co-founder, Terry Kinney.

Shalhoub and Ruffalo play estranged brothers Walter and Victor Franz, who are reunited to sell the remains of their father's household before the building is razed. When his father lost everything in the Depression, Victor gave up his chance at college and a career in science to stay home and take care of him. Walter, however, went on to become a successful doctor. Something about why one got his chance and the other didn't has festered for 16 years and kept the brothers apart.

Victor's wife, Esther (Hecht), is tired of living on a policeman's salary and urges her husband to retire. She also wants him to accept Walter's offer of a job and his half of the money they might get for the sale of the household furniture and possessions.  Walter seems eager to make amends with his brother but Victor hesitates. At what price does this offer come?

Picking a name randomly from the phone book, Victor contacts Gregory Solomon (DeVito), an eccentric 90-year-old furniture appraiser to see what the old stuff, no longer in vogue, can bring. Set Designer Derek McLane litters the stage with all kinds of dusty, old antiques with many pieces suspended around the border of attic ceiling, a portend of how the past is looming, threatening to crash down on the brothers.

The play is one of Miller's best, in my opinion, giving thorough development to the characters and peppering the philosophical monologue about life with humor. Not wanting to give spoilers, let me just say that after watching Solomon eat a hard-boiled egg --  which seems to trigger genuine laughter from Ruffalo -- you will never eat one again without thinking of DeVito. Lines about movie tickets costing $2.50 (it is set in 1968) and about the federal government not being reliable generate bonus laughs as the original dialogue takes on new meaning in current times.

The play runs a bit long at two hours and 30 minutes with an intermission, and at times Miller seems to have forgotten he has stashed Solomon in the bedroom, but overall, it's a very human, raw, honest look at the ghosts in families and how they affect us when we try to reconcile the past with hopes for the future.

Hecht and Shalhoub are excellent and bring depth to characters we might otherwise not like. Esther is at once a fed-up housewife who is ashamed of a husband who doesn't seem to know how get ahead and his devoted wife and friend. Walter is a combination of a condescending brother trying to one-up his sibling and a display of humility by a man who has realized the folly of his ambition.

DeVito's comedic timing is a charm, even if we don't fully buy him as an aging Jew. Ruffalo, however, struggles to bring layers to Victor and the character comes off as clueless instead of a son who has been taken advantage of by his father.