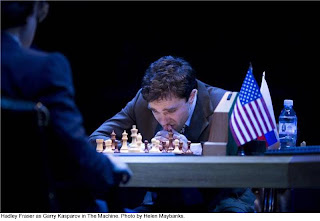 What'sIt all About?
The famous man vs. machine chess mach between World Champ Garry Kasparov (Hadley Fraser) and Deep Blue, IBM's chess-playing computer in 1997. Kasparov, perhaps the best chess player in the game, starts beating champs at a very young age (Lorenzo Allchurch and Nicholas Croucher share the role of young Garry) in his native Russia thanks to the efforts of his mother, Clara (Francesca Annis), who recognizes her son's talent and trains him. He becomes the world's youngest world champ at age 22.

Meanwhile, over at  Carnegie Mellon University, Murray Campbell (Trevor White) and Feng-Hsiung Hsu (Kenneth Lee) team up to make the chess-playing computer designed by their professor, even faster, which gives their machine a chance at beating a human. They hire Joel Benjamin (Brian Sills), a grandmaster who once played the undefeated Kasparov to a draw, to help program Deep Blue.

What are the Highlights?
The match ensues amid flashbacks to tell the story, staged with clever choreography by Jonathan Watkins and an almost boxing-match look to the set (Lucy Osbourne is the designer), placed on the floor (which evokes the design of a computer chip) and surrounded by stadium style seating with video trons overhead and play-by-play by Mandy Dinkleman (Phil Nichol) and others. The performances are nicely developed and the suspense is tangible, even if you know the outcome. An ensemble supporting cast plays multiple characters from the principal characters' lives.

There's a love story thrown in too -- Hsu's relationship with Tamsin (Antonia Bernath), a cheerleader at school. His obsession with work and becoming a success in this country threatens their chance of a future together, however.

The Renaissance Revival hallway and staircase with their turn-of-the-19th-century lighting fixtures are exquisite.

What are the Lowlights?
Sound Designer Ian Dickson for Autograph Sound has a real challenge in the armory's cavernous, 55,000-square foot drill hall with an 80-foot high, barrel vaulted roof and echoes abound.

The Machine had its world premiere at the Manchester International Fringe Festival and is a co-production by Park Avenue Armory, Donmar Warehouse (where Rourke is the artistic director) and the festival. Park Avenue Armory has an exciting line-up of offerings including shows, family programs, lectures and artist talks. For tickets and information: