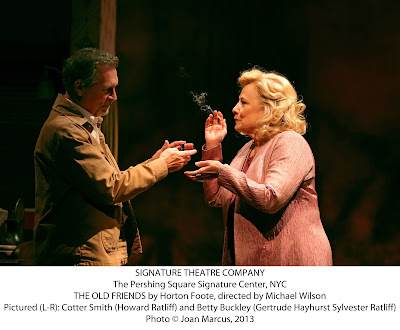 What's It All About?
The characters of Mamie Borden (Lois Smith), Albert Price (Adam LeFevre) and Julia Borden Price (Veanne Cox) from Only the Heart are revisited in the world premiere of Horton Foote's play focusing on the the dynamics of family and relationships in 1965 Harrison, TX. Sybil Borden (Hallie Foote, the playwright's daughter) and her husband, Hugo (Mamie's son) are moving back to rent her childhood home from her sister, Julia, following their hard times in South America. It's humiliating, especially when spoiled Gertrude Hayhurst Sylvester Ratliff (Betty Buckley), an old nemesis, sees Sybil -- or the jewelry the impoverished woman needs to sell, rather -- only as the object of winning a competition with Julia as the women try to outbid each other in a show of wealth. The competition extends to men too, as lushy Gertrude stakes her claim on Howard (Cotter Smith), the brother of her late husband and the manager of her ranch, whom she jealously thinks Julia likes. Julia flirts, forcing her rotund, husband Albert (he's lushy too) into fits of jealousy. But Howard would rather be around his old love, Sybil. Rejected, Gertrude throw herself at young farmhand Tom Underwood (Sean Lyons) and threatens financial ruin for Howard if he tries to leave her employ. Mamie, however, seems oblivious to the intrigue around her and happily makes plans to go live with kind, welcoming Sybil.

What are the Highlighs?
Well, it's Horton Foote. I happen to love everything written by this playwright who recently died at the age of 92 after rewriting this piece. It has his daughter, Hallie Foote, and Director Michael Wilson, two of the premiere interpreters of the playwright's work, involved. That's a lot of highlight. LeFevre also stands out at the mean-spirited, sad Albert.

What are the Lowlights?
These folks seem a bot darker than the usual family and folks we know in Harrison. They are somewhat less forgiving, with a less hopeful message. The women might not be as likable in this work, but they still are written by a writer who understands and respects them, so their stories feel real. Betty Buckley is larger than life as Gertrude, but spends a great deal of her time yelling.