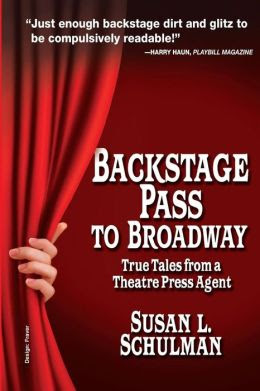 A Fascinating Tour Behind the Scenes of the Great White Way
By Lauren Yarger
When I heard that Susan L. Schulman had written "Backstage Pass to Broadway: True Tales from a Theatre Press Agent" (Heliotrope, September, 2013), a memoir of her decades behind the scenes on Broadway, I immediately requested a copy and put it at the top of my reading pile. Who better than this insider to give us a tour of the goings on and celebrity tidbits that make Broadway one of the most exciting places to be?

I started smiling at the very opening of the book, designed to look like the credits in a Playbill:

What follows is a fascinating trip through Shubert Alley and anywhere else theater was being made since Schulman was there for it all. A native New Yorker who grew up loving the theater and waiting at stage doors to thank stars for the impact they had on her life, she began as a press agent with the Bill Doll Agency A typical day's work might have included pitching story ideas to Ed Sullivan or fielding interview requests from Barbara Walters while winning the confidence of an insecure Lauren Bacall trying to reinvent herself as a Broadway musical star in Applause in 1969 after her Hollywood career ebbed.

One day Schulman is  lending her reading glasses to George C. Scott. The next, she's dancing with Bob Fosse. She had me, though, with her description of watching Yul Brynner perform "Shall We Dance" from The King and I  at the Tony Awards. The description is written with a passionate love for theatermaking at its best. Did I mention that this book is simply fascinating?

There is plenty of dirty laundry hanging in the Broadway dressing room and Schulman doesn't hide it. In true journalistic fashion, she tells the story from her perspective (this is a memoir, of course) but let's us come to our own conclusions about people who were less than pleasant to deal with (there are no "catty" cheap shots here) . I have a new perspective on Leslie Ann Warren, who comes off as less than Cinderella-like, shall we say, in her dealings with cast and crew on the set of the long-ago forgotten show Dream. (Particularly funny are Schulman's attempts to shield the show from columnist Michael Riedel's scathing write-ups about the chaos and low morale on the set).

And then there are her dealings with the legendary producer David Merrick. I won't give away spoilers, but will just say, it wasn't pretty.

"I am honored to join the long list of distinguished theatre professionals to be fired by David Merrick." In "Backstage Pass," she speculates that she is the only person to win a legal judgment against Merrick and actually collect the money.

In addition to the tales from backstage, Schulman choreographs helpful information about the art of press management and offers wisdom for how actors can better relate to each other and to the people involved in trying to make their show a success.

(A copy was provided by the publisher).
Posted by LaurenYarger at 12:54 PM